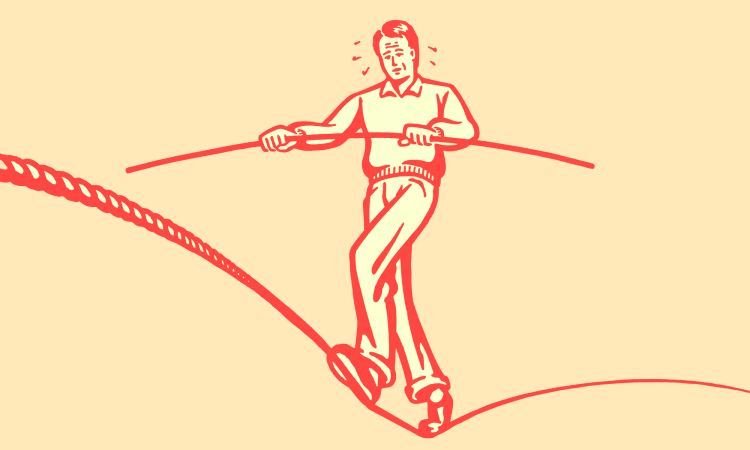 Many words in the “dictionary of psychology” have become part of popular culture, so it’s not unusual to say “I’m stressed out” or “I’m anxious.” Often, doctors and other healthcare providers also use the two terms stress and anxiety indiscriminately, even if they are not the same.

The problem is that both stress and anxiety cause the same symptoms, so it is not always easy to recognize the differences between the two. In fact, both anxiety and stress are a response to the environment. The problem arises when these states are maintained for long periods of time.

What differentiates stress from anxiety?

1. The cause of stress is easily identifiable, that of anxiety no. As a general rule, stress occurs in the presence of stressful situations, such as an excess of work, the breakdown of a relationships, interpersonal conflicts or illness. On the contrary, anxiety is a widespread state, which persists even when stress has disappeared. In practice, we know where stress comes from because there are one or more situations that concern us, but it is more difficult to determine what causes anxiety.

2. With anxiety prevails fear, with stress the worries. Another difference between stress and anxiety lies in the feelings that both states generate. Although they may seem identical at first glance, the truth is that anxiety behaves like a snowball downhill and tends to turn into a generalized fear, the highest expression of which are the panic attacks. Conversely, when we’re stressed, worries often have the precedence, which usually revolve around the trigger situation as well as a feeling of nervousness and frustration. In anxiety these concerns are more vague and generic.

3. Anxiety is an overwhelming future, stress an overwhelming present. A difference between stress and anxiety is its projection over time. Anxiety is often the answer to the anticipation of situations, the idea that something bad could happen, so it is more a terrified look to the future, the fear of something that has not happened yet. In fact, fear of anxiety is one of the main factors that turns you anxious. On the contrary, stress is often an excess of present as it is usually accompanied by the feeling of not being able to cope with the situations you are experiencing, and is activated when you believe not to have the resources to cope with certain events. A very simple example to understand the difference: the person is stressed when arrives late to an important meeting and overthrows a cup of coffee just leaving the house, on the contrary, is anxious when thinks constantly that he might drop the cup of coffee on himself.

4. Stress is often caused by external factors, anxiety feeds on internal factors. Although it is difficult to distinguish between internal and external factors, stress usually tends to be the result of events we find difficult to handle. The situation that causes them tends to escape our control. On the contrary, anxiety is fueled above all by internal factors since it involves an agonizing anticipation of events that have not yet occurred, it is the expression of anticipatory catastrophic thoughts. The difference between internal and external factors is important because if you know exactly what you care about, you will be able to take the necessary steps to cope with this situation, be it an external event or a problem that feeds in your mind.

5. Stress disappears with the stressful situation, anxiety stays longer. Normally, when the worrying situation is resolved, the stress disappears or at least diminishes. For example, when we finally finished and handed over the project, we released a heavy burden. But with anxiety, it is not the same because, since it is not caused by a single event, sometimes it is necessary to resort to psychological therapy to learn how to handle this state and relax.

When do you have to worry about it?

It is important to know that eustress, as it is called the positive stress, is not harmful. Instead, it gives us the extra energy needed to handle the task that awaits us. Even anxiety is not negative, that state of apprehension that occurs mainly when we feel vulnerable helps us to prepare our body to action. This is why both states produce an increase in adrenaline production, heart rate and muscle fatigue.

The problem begins when these states, which need to be temporary, become chronic. At this point our body is overloaded and the endocrine and nervous system begin to give the first signs of saturation and may even collapse.

Therefore, although these are normal responses to certain situations, it is important to limit them as soon as possible. In fact, in many cases, when stress persists over time, it can turn into anxiety, and this can end up causing panic attacks that greatly limit the person’s life.