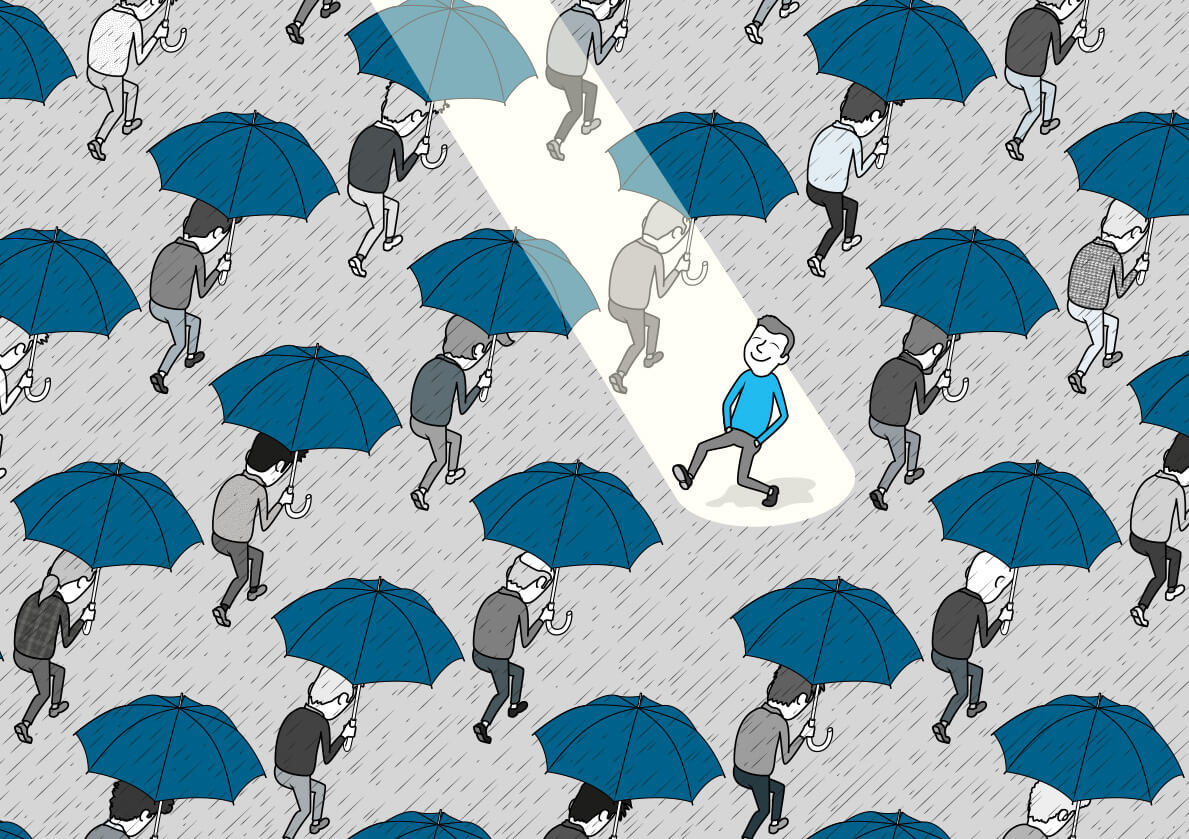 “You can’t avoid that problems come to your door, but you are not obliged to offer them a chair to sit comfortably” said Joseph Joubert, a French essayist from the 18th century. Unfortunately, however, we often do the opposite, we remain prisoners of the circumstances, and we do not realize that when things go wrong we are not forced to go with them, we must not let ourselves be dragged. Sometimes the problem solving is simple, such as changing the point of view for not getting trapped by negative thoughts.

You see the world how you feel, not like you are

In life nothing is eternal, everything goes. The fact of worrying or mortifying yourself will not make that the problems pass faster, on the contrary, it’s as if you offered them a very soft couch to get comfortable.

Unfortunately, when we are facing some mishaps, these generate a strong emotional response that blurs our view. In fact, a very interesting study conducted at the University of Freiburg revealed that depression makes us see the world’s grayest, literally, because it affects the electrical response of the retinal cells, which are responsible for the “vision of contrasts”.

Likewise, another experiment conducted at the University of Bristol has found that anxious people have difficulty in detecting emotions in the facial expressions of others and often see only rage. This tells us that when emotions take control, it is more difficult for us to see the world as it really is.

Faced with a problem, it is as if we suddenly had a tunnel view that prevented us from seeing the whole picture. So it’s very easy to let yourself be carried by circumstances and adopt a negative and alarming thought, so we let the problems drag us with them.

1. Do not fight against your emotions, assume them

Emotions are not negative themselves, they are very important messages that you have to learn to listen to. In fact, you can’t avoid feeling sad when something bad happens or angry when you see someone who has committed an injustice. There is nothing wrong with this. The problem begins when you let the emotions take control and blur your sight. In these cases, is produced a real emotional seizure, so that fighting against it is usually counterproductive, it’s like swimming against the current: it simply will blow you out, you will not be able to move forward. Therefore, the wisest thing to do is be aware of what you feel and let it go.

A trick that helps many people understand this idea comes from Buddhist philosophy and is equating to the emotions in your eyes. You can’t control everything you see at any time, every moment you are bombarded with thousands of visual stimuli, but you do not usually worry about them. Take note and turn your gaze to focus on what really interests you. You can do the same with emotions. Subtracting them part of the impact they will affect less your perspective of the problem.

2. Become an expert in cognitive restructuring

Emotions are not the only ones that affect your perspective of the problem, also your beliefs, expectations, and thoughts affect it. If over the years you have developed a catastrophic style of thinking, this will automatically turn on whenever you have to deal with a problem. Thus, in order not to be dragged away from the current, you also have to pay attention to your thoughts.

Cognitive restructuring, a very effective technique of the cognitive-behavioral therapy, is used to identify and correct negative thinking patterns. The first step is to monitor all the automatic negative thoughts that come to mind and generate emotional stress and frustration, such as “I’m a disaster, I will not be able to solve the problem”. This thought should be replaced by a more functional one, such as: “With a bit of patience and serenity I will be able to solve the problem”. As you can see, it is not about resorting to unrealistic and naive ideas, but to adopt a more realistic attitude.

However, this technique is not limited to replacing a thought with another, it would be ineffective because the mind is not easily fooled. The important thing is to question the validity of those negative automatic thoughts, until you understand that these are erroneous generalizations. Look for the origin of these thoughts and find situations in your life to what they do not apply. When you face these thoughts and question their validity, little by little they will become weaker.

3. Take a distance from the problem by moving to the past and the future

“We can’t solve problems by using the same kind of thinking we used when we created them”, said Albert Einstein. To exit this negative cycle you need to change perspective. It is essential that we establish an emotional distance. To figure out exactly what it means, imagine that the problem with which you have to deal is a tapestry. You do not understand what is happening and how to solve the problem because you are looking from below, under the tapestry, and you see only a tangle of meaningless threads. However, what happens if you turn it upside down and watch the tapestry from above? Suddenly everything makes sense because you have changed perspective and now you have a more global vision.

There are several techniques that help you take this emotional distance, one of the simplest and most effective is “the traveler of time” as it also activates your natural healing and resilience resources. In practice, just imagine you can travel over time. Look in your past, a situation that has worried you seriously and made you feel bad. Valorize it with the eyes of the present. You will notice that many of your worries have been trivial. Now imagine moving to the future, five or ten years, and look back at the problem that you are experiencing today. Ask yourself whether it is necessary, or intelligent, to deal with it this way.

Finally, don’t forget that when things do not go as you wish, you do not have to go with them, but take them where you want them to go.