Home » Phubbing: Ignoring the others to attend the smartphone 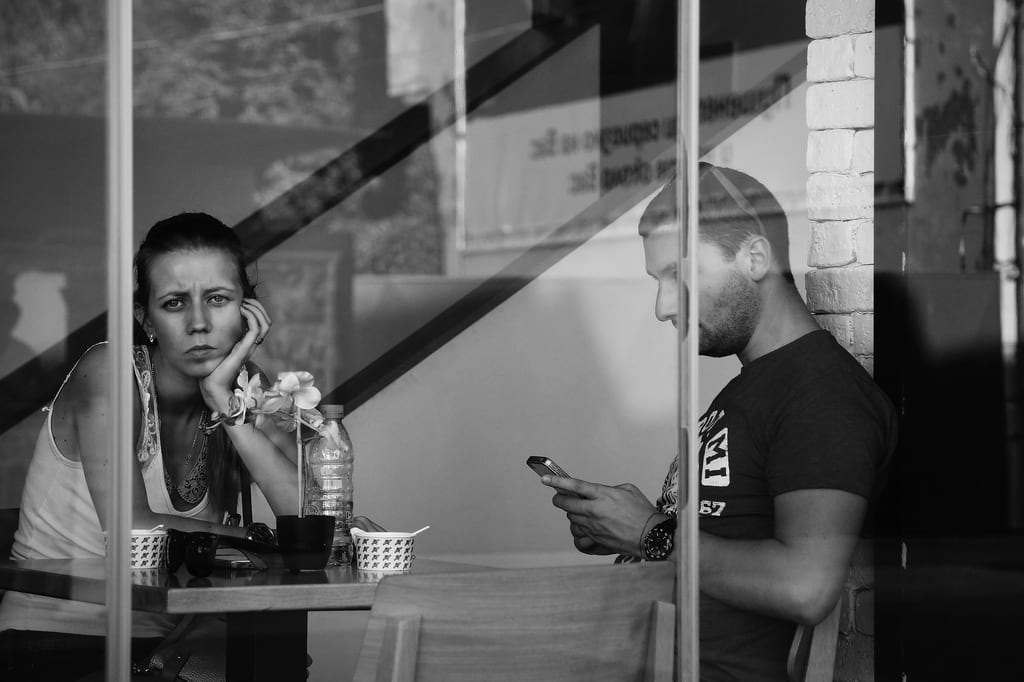 It is surely happened to everyone: we are trying to keep a conversation with someone when, suddenly, he pulls out his cell phone and “abandons us” completely. It can happen in couple relationships, in dinners with friends or while we’re trying to solve a problem with a colleague.

It is a small gesture, sometimes even fleeting, but more than enough to create a psychological barrier and generates deep feelings of rejection and disconnection in the other. It is a phenomenon called “phubbing”, a word that derives from the union of the words phone and snubbing. Therefore, it refers to paying more attention to the phone than to people around us, even if sometimes the mobile phone has not even ringed or vibrated.

This practice is so common and widespread that it is estimated that if it were an epidemic it could decimate ten times the population of China. However, beyond the cold numbers, it is important to understand the profound psychological implications of phubbing.

A study conducted at Baylor University interviewed 450 people about the nuisances caused by phubbing and revealed that:

– More than 46% said that their partner stopped paying them attention for using the phone.

– Over 22% indicated that phubbing caused problems in their interpersonal relationships.

– Almost 37% confessed to feeling depressed because of this behavior.

The typical signs of phubbing

– During the spare time that you spend together, the person never detaches from his cell phone and continually checks it.

– The person never separates from his phone and always puts it where it is possible to check it, establishing a sort of psychological barrier.

– When the phone rings, the person always responds, even if are only messages or notifications of social networks, regardless of whether this interrupts the communication.

– The person controls continually the phone, even if it has not ringed or vibrated, just to have a look.

– The person talks to you while checking his cell phone, with a disinterested attitude as he focuses on the screen.

– The person takes advantage of any small break or silence in the conversation to check his smartphone.

As the phubbing spreads, it sows in its path a series of negative feelings such as anger, frustration and even jealousy. In a couple relationships it is particularly harmful because reduces the satisfaction level of the person who is the victim, as well as generating discussions and a progressive detachment that may end up causing permanent separation.

In fact, a study conducted at the University of Virginia Tech found that the mere presence of a smartphone on the table, even if the person does not use it, generates feelings of disconnection in the other, making this person feel more emotionally distant. If someone leaves always the smartphone at sight, while we try to have a conversation, we perceive that the person is less interested and less empathic, so the relationship we maintain is less satisfying.

The death of the conversation

To fully understand the psychological effects of phubbing, it is necessary to start from the fact that time is our most precious asset. When we decided to spend time with someone who prefers to use the phone, perhaps to communicate with other people through social networks, we perceive that somehow we are rejected or not sufficiently interesting or important.

That’s why, in the background, phubbing always implies a lack of respect towards the person who is dedicating his time to us. It’s like saying that our time is more precious than his or that we have more important or interesting things to do.

But the real danger of this practice is that it spreads by imitation. In practice, feeling ignored, we also protect ourselves behind the phone screen, so we end up raising even more the wall between us.

This model of imitation is the excuse we use to not take responsibility for it. We prefer to hide behind our cell phone rather than face the situation and express our discomfort. In this way, phubbing spreads like a virus, killing the conversation.

We think that if the person with whom we share this moment looks at his cell phone, it is legitimate that we also look at ours. So we send him a subliminal message: “I also have something important to do”. In a sense, we try to level the attention and commitment in the relationship, so as not to feel inferior. The result is dramatic: the death of the conversation.

This is exactly the title of a series of images taken by the photographer Babycakes Romero in the streets of his city. He captured moments of everyday life in which each of us can identify. This photographer explained that he began to photograph people with their cell phones because he perceived some interesting symmetry in terms of visual, but then he noticed the sadness inherent in that act. These are some of his photos: 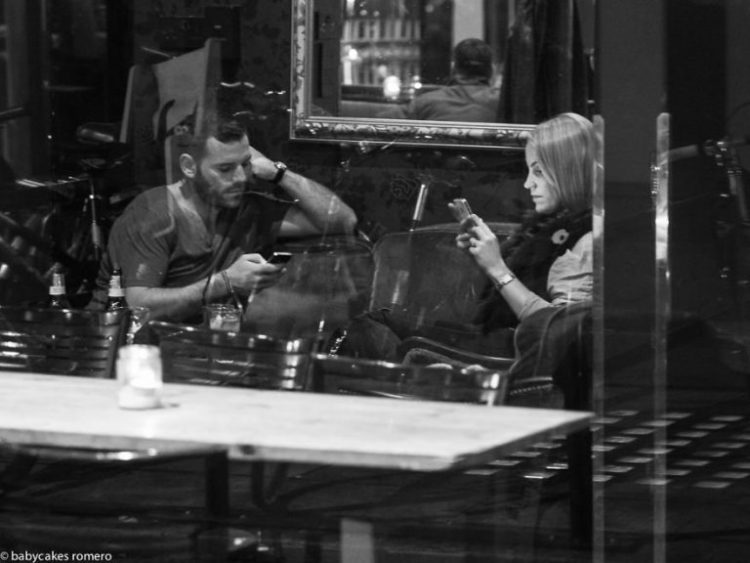 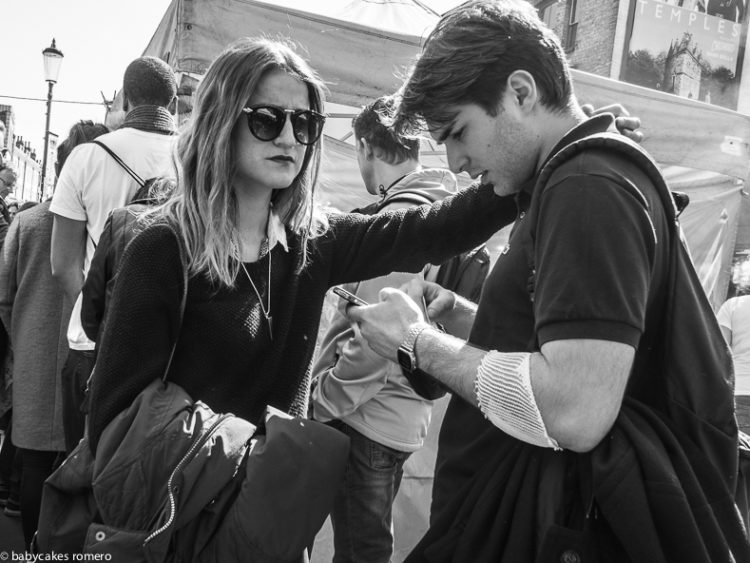 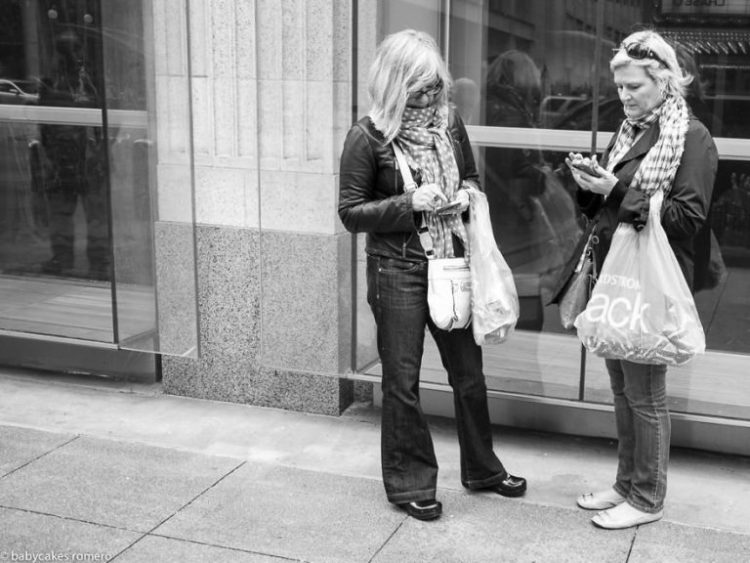 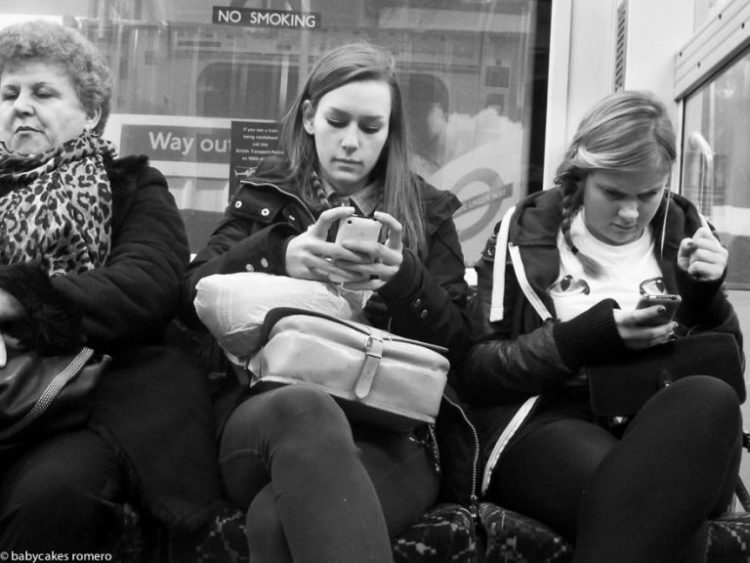 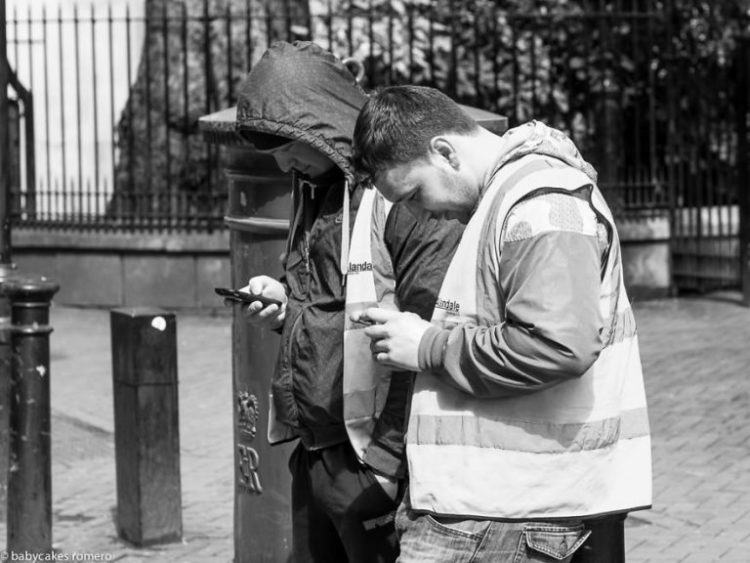 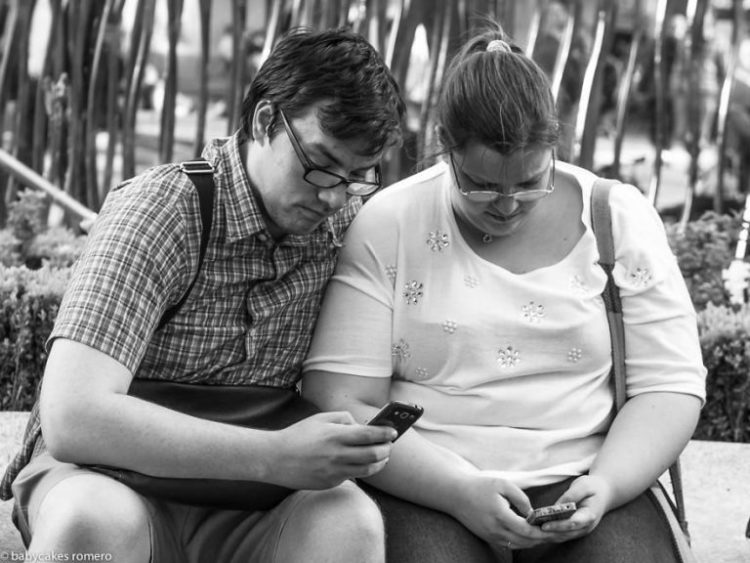 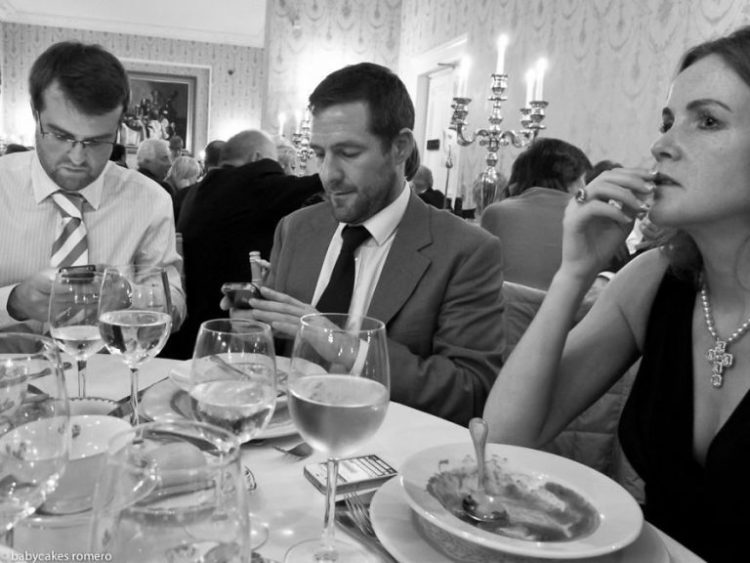 How to manage the phubbing?

– Speak frankly. If it annoys you that the person uses the phone while you are conversing, the best thing to do is that you say it straight. No need to be brusque or judge the other. The key is to express how you feel every time he checks the phone.

– Set limits. In some cases, it is difficult to get the other person to completely forget about his cell phone, but you can set a number of rules, such as not putting the phone on the table at dinner or just answering calls. You can also set “off-coverage hours”, for example when you are having dinner or at night after a certain hour. The key is to agree, not to impose, so that you both really compromise yourself and take into account the needs of the other.

Sources:
Roberts, J. A. & David, M. E. (2016) My life has become a major distraction from my cell phone: Partner phubbing and relationship satisfaction among romantic partners. Computers in Human Behavior; 54: 134-141.
Misra, S. et. Al. (2016) The iphone effect: The quality of in-person social interactions in the presence of mobile devices. Environment and Behavior; 48(2): 275-298.