Home » The Kiss of the Spider Woman: Homosexuality, desire and repression 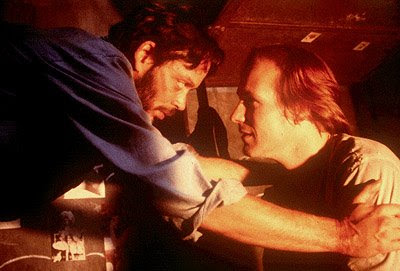 A forbidden story from its conception, a story that develops in the Argentina of dreams, the tango and the social repression, two men who meet in solitary conditions… short samples contained in the book: “The Kiss of the Spider Woman” of 1976, a history not to read but rather to perceive and live thanks to the peculiar style used by Manuel Puig. The book was made into a film with the same title released in 1985.

The author presents two characters who share a jail cell: Valentin, a young revolutionary activist who was arrested during a guerrilla demonstration and Molina, eleven years old, decorator, homosexual and accused of corruption of minors. From the beginning are looming vividly the characteristics of both: for Valentin the most important thing is revolution, for Molina, the feelings are the engine that drives his life.

The two begin to relate from the reality that keeps them isolated. Molina tries to make sleep Valentin telling him stories extracted from old movies after the long hours of torture he underwent.

During their conversations are emerging the profiles of both characters, the differences, and the different forms of feeling and judging. At the beginning Valentin takes the classic role of the hard revolutionary, but… slowly, the Molina network is closing on him until the topics of conversation turn into the most private issues and the two… share intimate experiences.

Since in the work does not exist the modulation of the narrator, but only the dialog of the characters, at the beginning it is quite easy to distinguish ones’ words from those of the other and the different opinions, but while passing time, it goes such a transformation that, when both characters show themselves from the inside, it is particularly difficult to differentiate between the two. It is an author’s problem? Absolutely not. It is a very subtle literary resource used by the author, that describes the transformation that each character is experiencing so that the reader can identify with them.

In the footer hides a peculiar character, a voice that stands up to express the feeling of the society and scientific community of that time about homosexuality.

It is a story that makes you think about sexual stereotypes and social norms. A subject that arouses many thoughts: how can a person experience such a profound change? It’s really been a change in personality, or simply came to light different facets of each of the characters that they did not even know? We could all change in the same way? Until what point we do know ourselves?

This story is full of surprises: why the two men stand together in the same jail cell? Molina also has changed, eventually being dragged in the field of revolutionary ideas, what will happen when Molina will be released from prison? Valentin will show its new personality to the comrades in arms?

There is no doubt, “The Kiss of the Spider Woman” is a story of seduction from the beginning to the end, and readers will also fall into the spiderweb. A psychological story which entertains untile the last page.