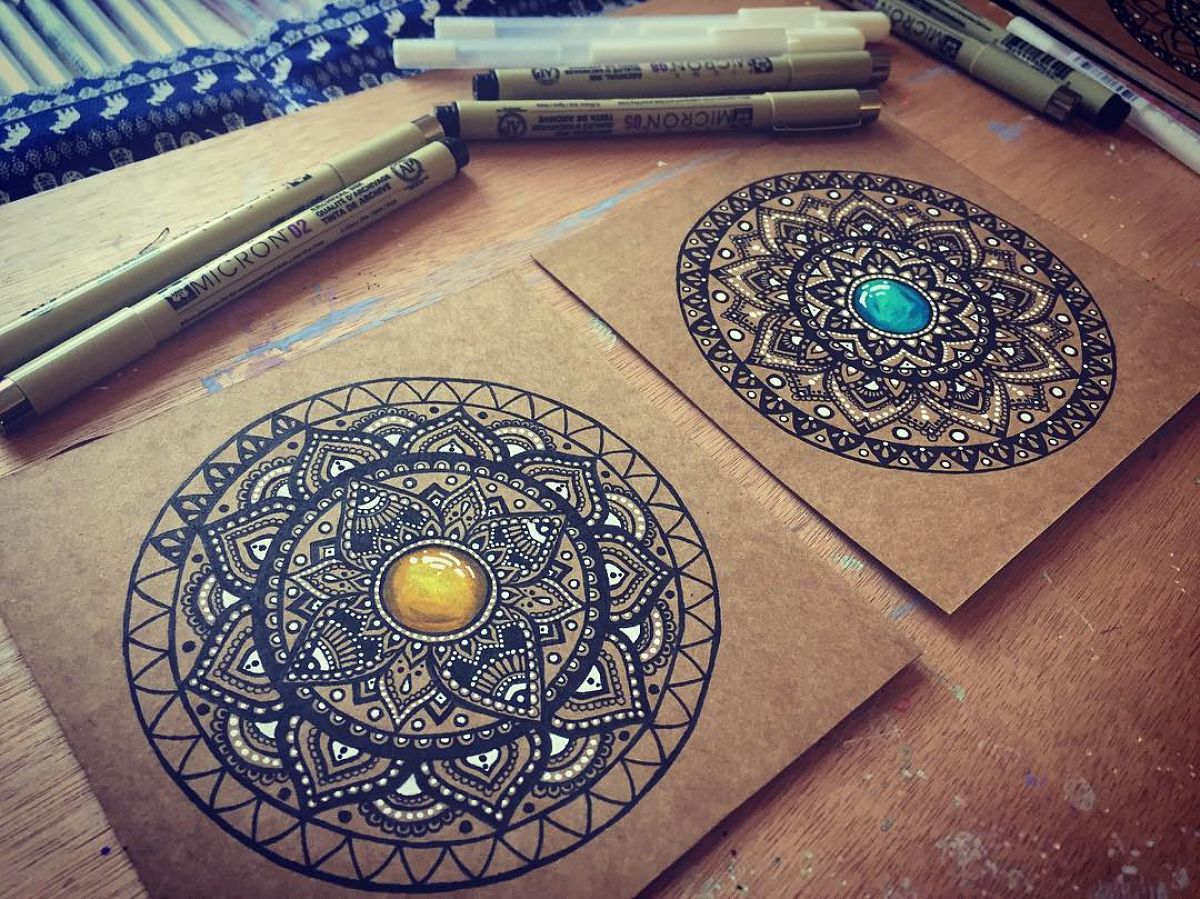 Anti-stress coloring books of Mandala have become fashionable, largely due to the urgent need we have to de-stress and disconnect from everyday life, even for a few short moments, the minimum necessary for our minds to clear a little.

The secret is that when we focus on drawing we replace negative thoughts with more pleasant images, so that we end up feeling better, both physically and emotionally.

Why anti-stress coloring Mandalas and not other illustrations?

The books of drawings do not have the same effect at psychological level as the Mandalas, since these are authentic energy centers of balance, which help us to transform the vision we have of our environment and of ourselves.

When we draw and interpret a Mandala, we get in touch with our “ego”. In fact, in the Mandalas everything is designed to stimulate a state of relaxation and meditation. Its circular structure, the amount of details and the repetitive patterns favor a state of introspection.

In fact, the word Mandala, that comes from Sanskrit, means circle or center, which is associated with the “ego”. An experiment developed in the Department of Creative Art Therapy of the Nazareth College generated anxiety in a group of people, then they were asked to color Mandalas, draw on a blank piece of paper or color an illustration. So they discovered that those who had colored Mandalas felt much calmer and more relaxed than the rest.

“Painting is another way to keep a diary”, said Pablo Picasso, so it is not strange that today anti-stress coloring books of Mandala are recommended to people who suffer attention deficit disorder, those who are subject to enormous stress, those who suffer insomnia or anxiety.

However, the curious thing is that this technique is not new in Psychology. Carl Jung asked his patients to draw Mandalas because he was convinced that this task facilitates the integration of psychological contents, giving us a better emotional balance and enhancing self-knowledge.

The psychoanalyst thought that Mandalas facilitated the psychological integration of the conscious and the unconscious, while promoting a process of significant self-reflection. Retiring temporarily to a symbolic world, a process that Jung called “active imagination”, has an almost “hypnotic” power, along with meditation, so that some areas of the brain are disconnected, especially the areas in charge of criticism, which allows us to connect better with our deepest “ego”.

Today Jung’s theory has been proven. Researchers from George Washington University recruited 180 students and found that coloring Mandalas helped them cope with conflicts between their new “professional self” and their “individual self.”

How do Mandalas to relieve stress work?

The secret of Mandalas to relieve stress is very simple: they allow us to concentrate on the present so that we develop mindfulness. Although we are not always aware of it, our mind is continuously jumping from the past to the future, we are distressed by worries of tomorrow and consumed by yesterday’s guilt. We completely put aside the present, so it is not strange that stress and anxiety ensue. Our mind continually jumps from one concern to another, often creating nonexistent problems or imagining disastrous and improbable consequences.

On the other hand, the anti-stress coloring books of Mandalas allow us to recover a treasure that we lost in our childhood: the ability to do something without pursuing any specific goal, just because we like it. The children’s game is a mean and a goal itself. Children play because they enjoy it, they do not pursue a specific goal but become absorbed in the task. The anti-stress coloring Mandalas allow us return to childhood and recover the ability to enjoy being fully present, without being pressured by any objective.

Psychologists from the universities of Texas and Emory found that, effectively, the anti-stress coloring Mandalas are an alternative nonverbal therapy that helps relieve the symptoms of post-traumatic stress. These researchers asked people with post-traumatic stress to draw their own Mandalas, over three days during 20-minute sessions. Then the participants had to reflect on the meaning of their drawings. They found that this activity not only helped them to relax but also allowed them to express themselves emotionally and facilitated the symbolic processing of the trauma, which led to a decrease in the level of anxiety.

Of course, this does not mean that we should rely solely on Mandala coloring books to manage our emotional states since, ultimately, it would involve evading reality. We must use them as a tool to relieve stress and anxiety, develop full consciousness and recover the ability to enjoy.

Ritual and frequency when coloring Mandalas to relieve stress

If you want to use Mandalas to relieve stress, forget about drawing on the way to work, on the subway or when you have five minutes before a meeting. To take advantage of the benefits of this technique it is important that you are in a calm environment with time at your disposal, so you can connect with yourself.

The ideal is that while you are coloring the Mandalas, you focus on your breathing and avoid any type of distraction, including music. At the beginning, it is normal you discover yourself thinking about other things, mind must be trained. Do not get angry and gently redirect the attention to the drawing, without judging yourself or getting angry for not being attentive. Remember that the idea is that you enjoy this activity, not that it becomes an additional factor of tension and dissatisfaction.

As a general rule, just 10 or 15 minutes a day are enough to relieve stress and achieve greater concentration on the present.

4 books of anti-stress coloring Mandalas, from beginner to expert

If you dare to try this therapy, you should bear in mind that there are many Mandalas coloring books and, although some have very striking illustrations, not all have the same therapeutic power.

“In the daily hustle and bustle, we all think too much, search too much, want too much, and forget the simple joy of being”, said Eckhart Tolle. This book not only contains coloring Mandalas but also motivational quotes. It is perfect for those who enter this world and do not want impossible drawings with tiny strokes.

Featuring 30 Mandala drawings on a rich black background for contemplation and introspection, this coloring book for adults encourages you to use your imagination to create vibrant patterns that reveal your hidden creative potential and bring you closer to your true self.

It’s a relatively small book, so you can take it everywhere. It also has motivational quotes, and floral inspired Mandalas of varying degrees of complexity, from the simplest to more intricate designs.

Ease your stress with each stroke of your colored pencil or pen. ColorIt’s original Mandalas is among the most popular adult coloring books. Every sacred circle will help you clear your mind and sharpen your creativity. This is the best quality book to color for men, women, and kids alike.