Home » Is this a circle? What your answer reveals about your personality 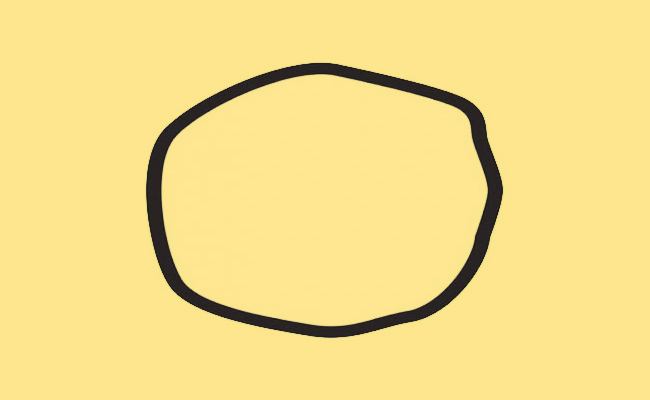 If you were asked if the shape that appears in the image is a circle, what would you answer?

That was the question that researchers at the University of Pennsylvania posed to a group of people. And their answers revealed some characteristics of personality, ways of thinking and seeing life.

How much deviation from the norm can you bear?

In the experiment, the psychologists showed the participants different types of geometric figures, also squares and rectangles, only that some shapes were perfect and others were not. Its objective was to verify the level of tolerance regarding deviations from the norm.

The participants then answered a questionnaire that inquired about their views on different social policies, such as the legalization of cannabis, same-gender marriage, and government funding of the welfare state.

The researchers found that those who claimed that the old image was a circle tended to have more liberal tendencies and were more open to new proposals. On the other hand, those who affirmed that it was not a circle showed more conservative ideas.

In practice, recognizing a circle in an imperfect figure implies that we are more tolerant of deviations from the norm, so that we are more likely to accept social differences and are more open to novelty and change.

On the contrary, people who cling to tradition do not recognize the circle because it is an imperfect figure that strays too far from the norm. These people tend to be more rigid in their thinking, prefer to stay in their comfort zone and adhere to social rules, so they show more resistance to change and are more reluctant to accept deviations from what is established.

Negativity bias, the origin of liberal or conservative thought

Why are some people more open-minded and others more conservative? A study carried out at the University of Nebraska gives us some clues about the origin of our open-mindedness or our need to cling to the known.

In this case, the researchers evaluated people’s physiological and emotional reactions to unpleasant images with aversive content, such as seeing festering wounds or people eating worms.

They found that the most conservative people, attached to stability and tradition, showed more intense responses. On the other hand, the more liberal people, supporters of innovation and reform, were less affected by these images.

This difference in reactions is mainly due to the negativity bias. In practice, we all have a tendency to pay more attention to negative stimuli than to positive ones, an evolutionary lag that helps us detect dangers and stay safe. However, we do not all manifest that negative bias with the same force.

People who have a stronger negativity bias and show more intense physiological responses to aversive stimuli, reacting with extreme sensitivity and disgust, are more likely to take a preventive approach that reduces the chances of negative events occurring or at least mitigates the consequences of them.

This excess of caution allows them to “protect themselves”, but it also leads them to assume a more conservative vision of life, which often implies sticking to what is known as a lifeline in the face of the uncertainty generated by the new.

Therefore, if for you the initial figure is not a circle, it is likely that you have a more intense negative bias that pushes you to stay in your comfort zone and support social measures that maintain the status quo.