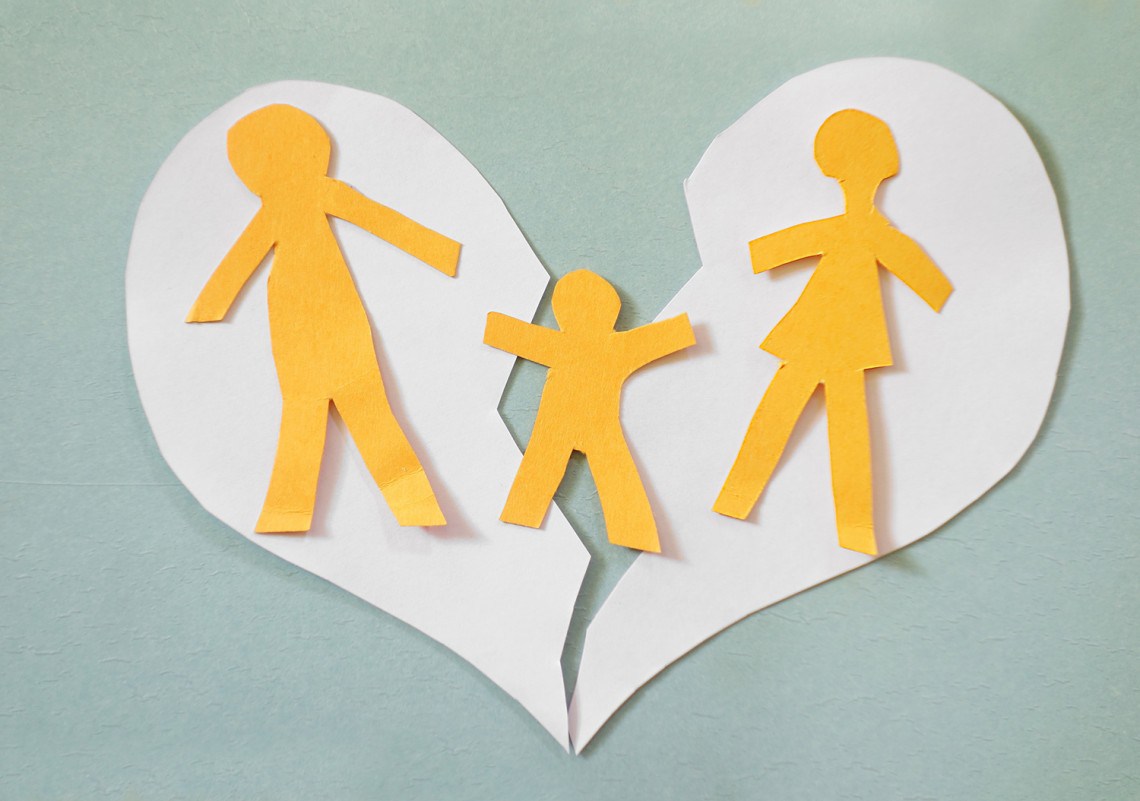 Separation is not something of two when there are children involved. Breaking the family is a difficult decision that adults do not always face well, thus, sometimes even children have difficulty in assimilating this transition.

A divorce always involves the collapse of common projects, every adult is forced to review his life plan, and sometimes also has to do with the feeling of having failed. Therefore a divorce can become a destabilizing experience that everyone will try to deal with in the best possible way.

Studies conducted by researchers from the Spanish Family Forum provide alarming numbers that let you see how divorce affects children:

– 25% of minor children of divorced do not end up high school, compared with 10% of stable married children.

– Only 30% of stable married children need psychological treatment. This figure increases to 60% in the case of children of divorced parents.

– 50% of divorced children had problems with alcohol and other drugs before the age of 15.

– 65% of young children, or teenagers, have a conflict with their father.

Finally, a study at the University of Berkeley has found that children who grow in divided families are more likely to get sick. During the 4 years following the divorce, the risk that children are suffering from health problems is higher, in addition to the fact that the little ones are slower in recovering from the disease, which is probably due to the stress they are subjected to.

Of course, the effects of divorce vary according to the stage that children are living. American psychologist Carl Pickhart perfectly matched how divorce affects children by age: “Fundamentally, divorce tends to intensify child dependence and speed up adolescent independence, often triggers a regressive response in children and an aggressive response in adolescents”.

The consequences of divorce on children according to age

In most divorces, the main victims are children since parents usually knew or guessed that the relationship was deteriorating, but parents’ separation usually surprises the children, shaking the safe and stable world to which they were accustomed.

How does parent divorce affect children by age?

– Children up to 2 years old. Little children do not understand very well what a divorce is and what its consequences are. But at this stage they are already able to perceive the changes that occur in the emotional state of their parents and of course they realize the absence of one of the parents. Nonetheless, the fact of not knowing whether that support figure will come back or not, causes them anxiety and insecurity, emotions that result in irritable moods, crying crisis, and changes in eating and sleep habits. The main problem at this age is that the child can live the absence of the parent as a true abandonment.

– Children from 2 to 3 years old. This is a very important stage for child development, so a traumatic divorce may cause a delay in psychomotor skills, language acquisition, or sphincter control. At this age the children are still unable to fully understand what is happening, so it is normal for them to feed the fancy that parents recover the relationship. It is also common for them to react with angry, or sadness, because at this age their emotional range is wider, but they do not have the tools they need to handle these feelings.

– Children from 3 to 5 years old. At this stage, kids can better understand the concept of divorce, so they will probably ask a lot of questions. But since they are still very self-centered, they usually feel guilty for the separation and think that the responsibility is theirs. At this stage, children also tend to develop many fears so divorce can turn them bigger, especially the fear of being left alone or that parents stop loving them. Also, usually the child is very possessive with a parent.

– Children 6 to 12 years old. At this stage, the child fully understands what a divorce is, though often continues to feed the illusion that parents return together, and when discovers that this will not happen may feel deeply disappointed, frustrated or angry. However, at this stage the child is far more empathic, able to take the place of others and may worry about his parents, especially if he sees them very sad. Some children may express their discomfort with regressive behaviors; that is, they lose some of the skills they had gained, especially emotionally. Others may look strong but in reality are afraid to express their feelings so as not to worry their parents.

– Teenagers. This is a difficult phase in which the teenager is looking for one’s own identity, but still needs the support of both parents. The divorce complicates this psychological process because it creates insecurity in the adolescent, who can react by challenging the limits or seeking support in the group. Sometimes can look for refuge in risky behaviors through which he or she tries to channel his or her emotions. There may also appear psychosomatic symptoms.

Does divorce always cause infantile “traumas”?

Let’s be clear, parent divorce is a big change for the baby and is often a source of pain. The world, as he knew it, no longer exists and he needs to get used to a new home. And if we add that the child has to change home, neighborhood and school, the challenge will be even greater.

However, this does not mean that divorce creates “infantile traumas” and that must be avoided at all costs. In fact, in many cases, it is preferable that parents separate themselves friendly rather than continue to argue, creating an unbearable climate at home.

The real problem is not divorce, but the way it is handled. It is estimated that 15-20% of divorced children still face strong conflicts even two years after separation. Only 25% of divorced persons managed to separate themselves civilly, without clashes and continue to support each other.

When divorce is handled well, it becomes a life experience for children. If it is a bad experience, the consequences of divorce can be very negative, but even in these cases, much will depend on the characteristics of the child’s personality, as some children are more sensitive to changes in their environment, as is the case of “orchid children”.

How to make that divorce do not affect negatively children?

1. Explain clearly what’s going on so that he or she can understand. While communicating the decision to divorce, it is important that both parents are present since this will give the baby more security and he or she will not feel abandoned by either of them. It would be good if you clearly explain your decision, using an appropriate language for the child’s age. If it is a definitive decision, it is important that he or she will be aware of it to not have false hopes.

2. Let him or her know that is not his or her fault. Many children feel guilty about the separation of their parents, they believe that divorce is caused by their behavior. That sense of guilt can become a very heavy burden they will drag for many years, and will cause them emotional and behavioral problems. It is therefore important that the child makes it clear that he or she has no responsibility for what happened and that you both will continue to love him or her too.

3. Provide the details you want him or her to know. After communicating the news, it is normal for the child to feel confused and disoriented, as he or she feels that his or her world is collapsing. Try to explain what will happen next. There is no need to go too far in detail, but the child will feel more confident if knows that can keep his or her mascot, that will not have to change school and that the parent who is going leave will be back visiting several times a week. These are small details that parents often neglect, but that transmit safety and trust to children. It’s also important to let him or her know that can ask you any questions when he or she wants to.

4. As he or she assimilates the news, validates his or her emotions. Most children need some time to assimilate parents’ divorce, usually between 2 and 6 months. During this phase you need to have patience and sustain them. Avoid using phrases like “This is the best decision” because the child will assume it is the best choice for adults, but not for him or her, and will feel excluded. Obviously the child wants none of the two parents to leave the house, so that may feel angry, disappointed, sad or worried. Validate those emotions and encourage him or her to talk about them. Explain that you are sorry that he or she has to go through this experience, assuming change as an opportunity for your child to develop resilience.

5. Keep the routine including new stimulating activities. Daily habits serve for the child to feel safe, so it is important that as much as possible you keep the same routine. Of course, it is also desirable to include new activities that please the child so that he or she can understand that even though is experiencing a difficult situation, he or she can continue to enjoy life. Thus, older children will understand that every change contains negative and positive things. The parent who leaves can take advantage of the opportunity to surprise the child with new activities and excursions.

6. Do not talk bad about the other parent. For children, the reasons for divorce are never enough. The child loves both parents and it does not seem right to him or her that they separate. So while it is important to make him or her understand the reasons for divorcing, you do not have to go into the details so to alter the perception of a parent in the baby, making it that he or she gets away from the parent leading him or her develop the Parental Alienation Syndrome. Keep in mind that in this process children are very vulnerable and can absorb the negative feelings of a parent and project them onto the other. Your son can not turn into a dry-tear napkin or a boxing sack to discharge your frustrations. Above personal problems should prevail the good of the child, and for parents the best way to do it is to continue to love and support the child as always.

7. Do not abandon or neglect your baby. In some cases, the feeling of abandonment that has the baby is real, because one of the parents abandons him or her, literally or metaphorically. In fact, abandonment is not only physical, the parent ignores the child, but also emotionally, in which case it depends more on the parent who cares for the child. In such cases, the child is usually transformed into the parent’s assistant, assuming roles and responsibilities for which he is not prepared.