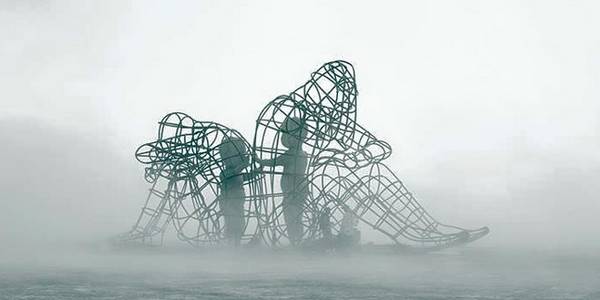 Developmental traumas are much more common than you think. A series of studies conducted by psychologists at Duke University Medical School revealed that 78% of children reported having had more than one traumatic experience before 5 years. At age 6, 20% had experienced traumatic experiences ranging from sexual abuse to emotional negligence, exposure to domestic violence, and traumatic loss.

However, those who have experienced developmental traumas may be afflicted with complex post-traumatic stress (PTSD-C), a problem characterized by difficulties in emotional regulation, distorted perceptions of abusers, difficulties in interpersonal relationships, somatization and problems to give a sense to life.

But often these people are not aware of having a problem whose origin dates back to their childhood. They think they’ve left the past behind, but that’s pursuing them from the unconscious.

How does childhood traumas influence the formation of identity?

Identity formation is a complex process that lasts all lifelong. Building the identity, including the feeling of being good enough, the ability to integrate emotions and reason harmoniously, the basic awareness of the emotional state, feeling safe and knowing who we really are, is affected by childhood traumas. What happens is that basic survival prevails over the balanced development of the “ego”.

An early childhood trauma may change brain development. In fact, it is well known that an environment in which fear and abandon prevails generates different adaptations of brain circuits, compared to an environment in which the child feels safe, protected and loved. And the worst thing is that the sooner you experience that anguish, the more its effect are usually deeper and lasting.

Therefore, often the identity of an adult who has suffered childhood traumas is organized around the need to survive and reach a basic level of security in relationships with the others. This leads him to a vicious circle in which, on the one hand, he experiences daunting and traumatic experiences, and on the other, avoids growth-oriented experiences.

People in this situation are highly identified with a “traumatic self”, at the expense of a more inclusive and flexible sense of self. They dissociate themselves from their environment and themselves from the beginning as a survival mechanism, and may remain disconnected from themselves during childhood, adolescence, or even early adulthood when they leave the toxic environment. In practice, they continue to experience the need to survive.

The phrases that hide a “traumatic identity”

When people experience a particularly disturbing childhood, they usually cannot remember much of their early years. These people often say “I did not have a childhood” or “I do not remember a lot of when I was a child”.

They can remember the particularly vivid moments, known as “flash memories”, but those moments have no context, so they do not make much sense to the person. It’s normal that they do not have a very clear story of themselves as children until they reach adolescence or even early adulthood.

In autobiographical terms, they lack what is said: “coherent narrative”, they cannot tell their life by following a logical thread. In fact, many people even say they feel robbed of their childhood. And without that base, the identity of the adult is seriously compromised.

Because of childhood trauma, children often react by disconnecting important parts of themselves to survive, is a sort of dissociation mechanism. These people often say, “I’ve always heard that I miss something, but I do not know what it is.”

The problem is that they tend to disconnect from sensitive areas, reinforcing other spheres, as a compensation measure to escape emotional suffering. In this way, a child with problems at home can try to become a model student.

Later in life, he may find that he has great abilities in certain fields while others remain completely hidden, usually those related to emotions, self-knowledge, and interpersonal relationships.

Many of the people who have suffered childhood traumas say: “I do not like to think about myself, it only makes me feel bad”. This feeling is particularly intense when the trauma is tied to important and significant people in their lives, such as parents or brothers and sisters.

The problem is that the exercise of introspection, the act of deepening, becomes a memory of those painful experiences, which implies that it is necessary to reconstruct their identity, and it is often much easier to escape from themselves than deal with problems that fall the roots in a distant past.

These people can learn to live disconnected from their “ego”, but this often leads to self-destructive behavior or deep dissatisfaction because they do not really know what they want and fail to build a solid life project.

It is not uncommon for people traumatized by their parents or caregivers to end up establishing friendships, romantic relationships, or even working relationships that are not good for them. They often say phrases like: “I attract people I do not like” or “I seem to have a magnet for people who hurt me”.

The problem is that these people meet individuals who are adapting to their traumatic identity, even if they strive to make different decisions or that others warn them that those relationships are not good. This generates a vicious cycle of re-traumatization through the repetition of the past.

As a result, they may end up surrounded by persons emotionally unavailable, violent or narcissistic, or end up trying to save and “fix” people with whom they have a relationship, assuming the role of “savior”. Obviously, these people want to find someone who can provide them with the emotional stability they need, but they unconsciously feel a strong attraction to the psychological abuser.

The constant traumas and disappointments lead them to think that “it is better to be alone”. Their experience of destructive relationships led them to assume a pessimistic image of the others, thinking they will always hurt them.

When feelings are not found in the family of origin, emotions are separate from identity. If a person grew up with phrases like “crying is of weak ones” or have been punished or reproached every time he has expressed his emotions, he cannot develop a healthy bond with this part of his “ego”.

Emotions will continue to be present, though many people grasp the belief that “they are not emotional” or “emotions are just a nuisance.” For this reason, emotions will end up creating confusion and chaos, since that person will not be able to recognize and handle them, because it has only learned to hide and repress them.

The problem is that we need emotions even to make good decisions in life. Emotional deregulation disconnects us from our intuition, leads us to make impulsive decisions and damage our relationships with others.

Others can describe a feeling of emotional anesthesia because they can only experience a limited range of emotions. In fact, they often refer only to vague emotions, such as frustration and boredom, because they have not learned to recognize their emotional states. It is also common they block feelings as dissatisfaction, until it grows enormously, to explode later in a contained anger that causes enormous damage.

Undoubtedly, the consequences of childhood traumas in adulthood are daunting. However, the person can reconstruct his identity and regenerate that traumatized “ego”. This implies returning to the past to accept those painful experiences so that they can be integrated into the history of life and thus be able to really turn the page.

There are two fundamental keys: 1. Understand that we are now safe and we are no longer the scared child; and 2. Assume that, although adults, we are likely to continue to process emotionally the developing traumatic experiences like children. Recognizing and assuming these realities is often extremely liberating.

Remember that it’s always possible to reconnect with yourself, even if you need to remove several layers to rebuild a much healthier identity. Undoubtedly, it is a difficult process, and you may have to resort to the help of a psychologist, but investing on yourself is the best thing you can do. You do not need to continue to carry the weight of the past, limiting your present and obscuring your future.