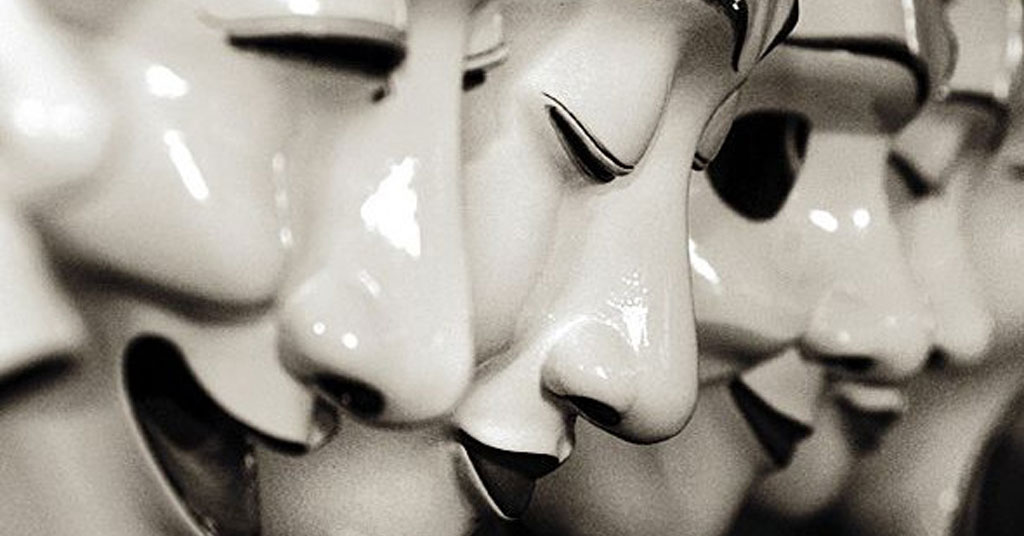 Hypocrite people have a public and a private face. They use different masks depending on the situation. They pretend to be what they aren’t, generally to take advantage, receive social approval or place themselves above the others.

The relationship with a false person is often complicated because we are never sure of what he really thinks or feels. And he probably doesn’t have any qualms about manipulating us to achieve his goals.

Hypocrisy is the inconsistency between what is said and what is done, or between what is thought and felt and what is externalized. It’s a way to hide or repress the true desires, thoughts and emotions to adapt to the expectations of the environment or take advantage.

In fact, the word hypocrisy comes from the Greek word, hupokrisis, which literally means “stage.” In that context, a hypocrite, or hupokrités, was simply an actor, someone who pretended to be someone else on the stage.

Although perhaps the best definition of hypocrisy comes from the American politician Adlai E. Stevenson, who said: “A hypocrite is the kind of person who would cut a redwood, set a stage and then make a speech about the preservation of nature.”

It’s true that, as social beings, we all experience a vital conflict between our interests and the interests of the others. It’s not always possible to match our wishes with those of the others. To resolve this conflict without renouncing to our “ego” and without creating excessive social friction, we develop different strategies that are more or less assertive and allow us to combine public and private interests.

However, there are people who have not developed these strategies, but prefer to hide what they think or feel. They are not dependent or submissive, but resort to hypocrisy as a strategy to achieve their goals, although in the long run it’s a maladaptive strategy because it creates a deep dissonance between behavior and emotions, beliefs and ideas.

How to unmask a fake person? The 5 behaviors of hypocrites

The 3 strategies that hypocritical and false people use

Why are people so hypocritical?

It’s likely that in your environment you will meet more than one hypocrite. And you’re also likely to wonder how it’s possible that you seem not to notice the inconsistency between their words and their actions.

The explanation for this phenomenon comes from psychologist Patricia Linville, who worked at Yale University and in the mid-1980s coined the term “autocomplexity”. Her hypothesis is that the less complex the cognitive representation of the “ego” is, the more extreme will be the fluctuations of the mood and attitudes of the person.

In other words, some people tend to perceive themselves from a very limited perspective, for example, they define themselves through the roles they play, so they think they are a “self-sacrificing mother” or a “successful manager”. The problem is that having such a limited definition of ourselves makes us more unstable psychologically and prevents us from dealing with the contradictions inherent to the complexity of the personality and the environment.

To better understand this phenomenon we can take a look at an experiment conducted at the University of Miami. These psychologists asked university students to evaluate the importance of study skills. Next, they were asked to recall all the times they had neglected the study, in order to unmask the possible hypocrisy behind the first answers.

Interestingly, at that time students who had a smaller autocomplexity were more likely to change their first opinions; that is, they rectified indicating that, after all, studying was not so important.

This could explain why some people say one thing and do another. His comments come from a representation of the “ego” completely separated from the “ego” that acts in other circumstances. In practice, hypocritical people only try to keep immune the simple identity they have built by separating their words from their actions.

In the case of politicians, for example, it’s usual to keep a discourse connected to their “political ego” while doing something diametrically opposed in their “corporate ego” or the “familiar”. In this way they manage to save their different “egoes”, because they aren’t capable of integrating them.

These studies indicate that many people are hypocrites without realizing it. In fact, often when we put them face to face with their contradictions they don’t recognize them and hide behind excuses.

Obviously, not all people live in this state of “hypocritical ignorance”. There are also those who learn to take advantage of hypocrisy, especially when they realize that following certain ideas is neither practical nor advantageous. These people have no problem proclaiming something and doing just the opposite, if they think it’s more convenient. But neither will they openly acknowledge their hypocrisy since it’s too painful and would represent a great blow to their “ego”, so they will argue that they have been moved by circumstances.

Why do hypocritical people bother us so much?

The answer, or at least part of it, comes from a study conducted at Yale University. These psychologists discovered that what bothers us the most about hypocritical people is not the inconsistency between their words and their actions, but that their moral proclamations are false and pretend to be more virtuous than they are.

In practice, we don’t like hypocrites because they disappoint us. In fact, it has been proven that we tend to believe and prefer moral statements or that imply a degree of generalization to explain the behaviors. For example, if a person leaves a project, we prefer the explanation “it doesn’t make sense to spend more energy” than “I don’t want to spend more energy”. Therefore, when we discover the truth we feel more disappointed and deceived.

This means that, in a certain way, we also contribute to hypocrisy lasting at a social level. In fact, even in certain situations it may be that we have behaved in a hypocritical way trying to give a better image of ourselves.

How to deal with hypocritical people?

The best way to fight against hypocrisy is to be authentic and understand that within each of us coexist many contradictions. We can all behave in a hypocritical way in some situations, but there is an important line between the level of social and tolerable hypocrisy and the intolerable hypocrisy that aims to give moral lessons. We don’t need to fulfill the expectations of the others nor do we have to become preachers of morality. We just have to live and let live.