Home » The black sheep is not wrong but only different 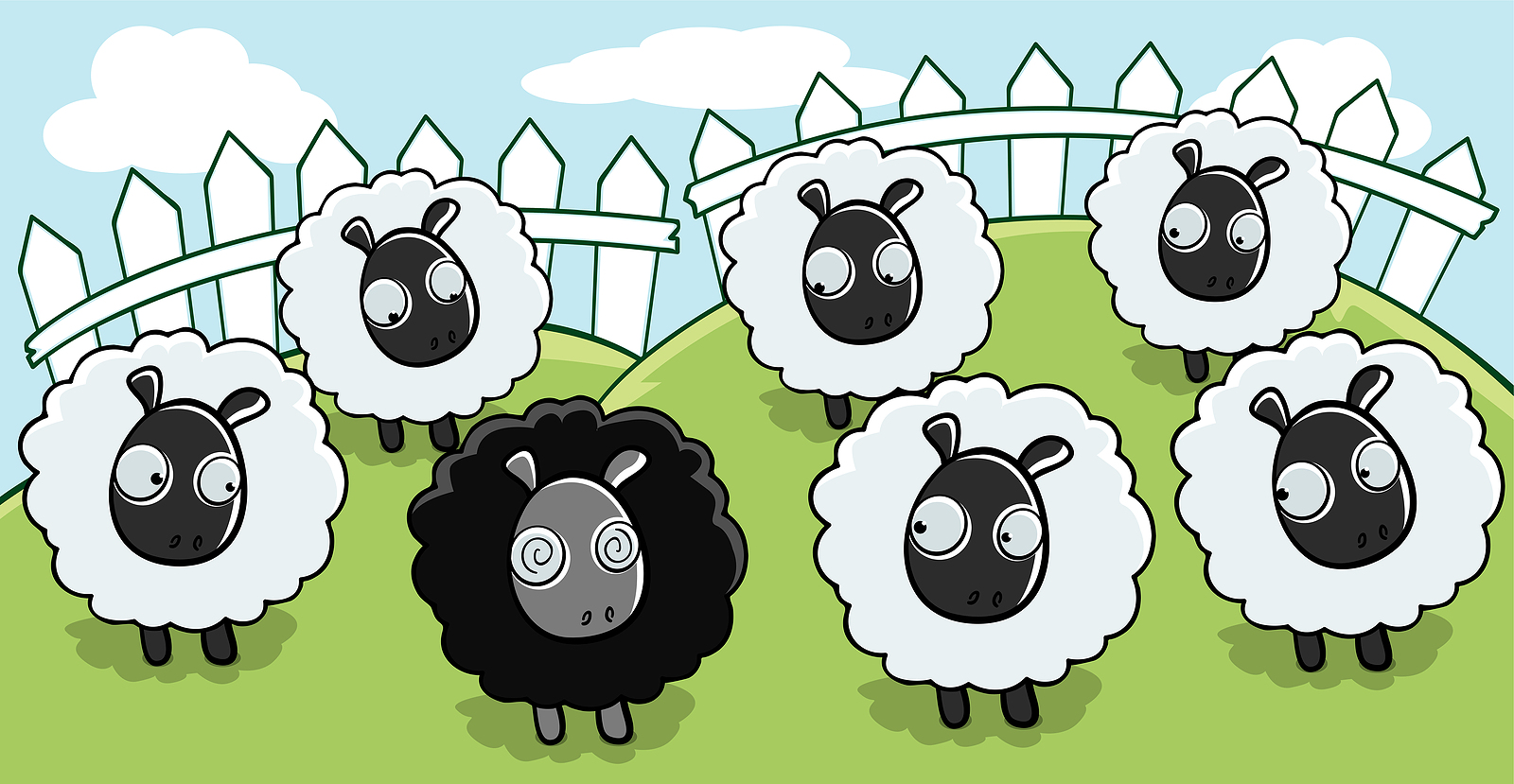 Every family has a black sheep. Is that person who did not follow the family tradition, does not share the same tastes and interests and, above all, dares to defend his identity. Often the others project their faults on this person transforming him in the “scapegoat” of the situation.

Of course, being the black sheep is not a pleasant feeling, especially because this term has a rather negative taste. When we decide that what defines and meets the other does not define and meet ourselves, they begin to look at us with concern because we crossed a line that we shouldn’t cross.

Black Sheep Effect: Why those who love you are also those who criticize you most?

To understand why the family and intimate groups create a black sheep, it is necessary to deepen the social identity theory proposed by Henri Tajfel, a social psychologist of Polish origin. This theory gives us some important clues to understand the phenomenon of discrimination within the group. In fact, we must understand that, however different they are, all the groups and their members have certain points in common:

– Groups concentrate in the negative characteristics of other groups. When groups judge other groups, usually tend to be negative because seek to influence the views of its members, so they perceive “their group” as the best. It is a cognitive bias in which we all fell sometime. For this reason we tend to say, for example: our football team is the best, our family is the happiest or our religion the truest, although we know that’s not true.

– The group exerts great pressure on its members. The group demands a lot from each member, exerting a pressure which aims to maintain the cohesion and inner harmony. Therefore, a parent can show very permissive with the children of the neighbor, but very strict with his own.

The Black Sheep Effect refers precisely to this pressure and criticism exerted on members of the group. In fact, the group tends to severely assess each of its members, maximizing his mistakes and applying punishments.

One of the classic studies in the history of psychology, developed in 1988, shows us clearly how this phenomenon occurs. These psychologists have analyzed the exemplary nature of the group members, one of the factors that determines the behavior of people in the group to differentiate themselves from the rest and that is responsible for the Black Sheep Effect.

During the experiment, they compared two groups of students, one of philosophy and the other of law. The members of each group listened to several recorded speeches, some were very interesting and some bad. During each proof the participant was told if the speech belonged to a law student or a philosophy one. Psychologists also included a group of students who didn’t belong to any particular course and to whom it was not told what was the matter studied by the person giving the speech.

This way it was posible to see that when students had to judge the speech of a member of their group (a person who studied their own matter), gave more extreme judgments. In practice, if a law student was listening to a bad speech of a student of his own course, tended to judge it as worse than that of a student of philosophy and vice versa.

The same effect can be seen in fans of a football team. When the team plays poorly they are the first to complain and qualify the performance as bad, giving more extreme judgments. The same happens within a family or group of friends.

In practice, the group should ensure not only that members are more united, but also that they follow rules that identify them and, of course, makes them “better” than others. Therefore, any deviation from the norm is a warning sign that deserves punishment.

1. Preserve the positive identity of the group, ensuring that its members respect the rules

2. Show the other members what happens when the rules are broken

3. Divert the attention of the members of the group from other problems, more dangerous, which can profoundly influence the group identity

Behind every black sheep hides the fear of white sheep

Behind the term “black sheep” there’s a great amount of fear.

– Fear that other issues could come to surface. In many cases, labeling one of the group members as a black sheep, involves transforming him into a scapegoat. In fact, the black sheep can be the force that holds together the group distracting the attention from other issues and much more profound tensions that could challenge the positive identity of the group.

– The fear caused by old traumas. In other cases, the fear stems from the fact that we reflect in the black sheep, which means, the other people in the group identify in the black sheep desires, behaviors, attitudes and aspirations they had to suppress in the past, to submit to the control of the group. Seeing these behaviors is like reliving a trauma of the past, which instinctively generates a defensive reaction.

In any case, whatever the source of the problem, you need to be aware that you’re not born black sheep. It is the social environment that qualifies you as such when you don’t meet certain standards or expectations. Therefore, reacting strongly and decisively to that label is an act of courage.

Belonging to a “herd” doesn’t make you happy: Have the courage to find your way

When a person assumes to be the black sheep of the family can surrender and passively accept the role. In fact, many accept this label and diligently perform the role assigned to them by the group, which means usually undergo ridicule, contempt and constant criticism without complaining.

But when you’re labeled as black sheep, you also have another opportunity: react. You don’t need to accept a role in which everybody washes his hands and the only one who got hurt it’s you. You don’t have to embark on a personal crusade, but only assert your right to be who you really want to be and live the life you want.

In fact, there are times when being considered the black sheep of the family may be the best thing that can happen. Ask yourself if belonging to this “herd” of white sheep makes you really happy. If not, maybe it’s time to take an emotional distance. You will do so getting gradually undressed of the different layers that have gone creating around you during these years. Basically, this process of liberation occurs in three phases:

– Becoming aware of your individuality. You are not required to be like your parents or siblings. You must not think like them, agree with their views or want the same things. You don’t have to act according to their rules or do what others expect you to do. You have the right to be yourself and follow your dreams.

– Feeling comfortable with yourself. Black sheep often believe there’s something wrong with them, that don’t deserve respect and love simply because are different. This message, repeated constantly, may be rooted deep inside you, especially since you’ve been told it by the people that presumably are important to you. Therefore, it is essential to feel good as you are, with your values, ways of looking at life and your decisions. Be yourself and don’t be ashamed of it, on the contrary, be proud.

– By accepting the others. When the black sheep gets finally rid of the negative influence of those around her and realizes that there’s nothing wrong with her, often ends up feeling resentment toward those who have made her feel bad for so many years. But if you really want to get rid of this label and free yourself from the pressure of the group, the last step to do is forgive these people and accept them as they are.