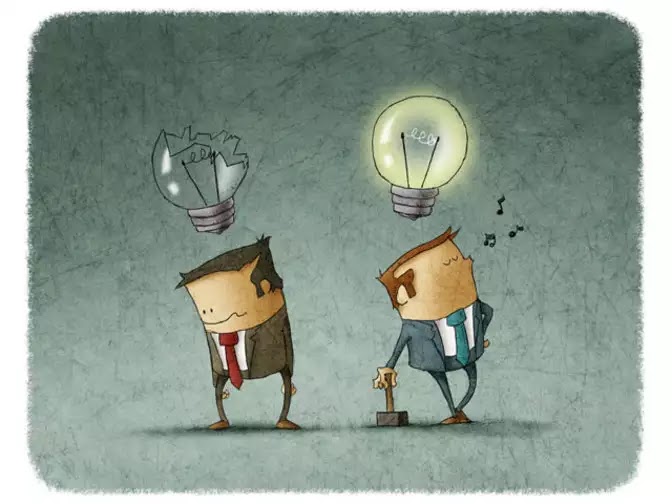 Envy is one of the deadly sins and one of the most corrosive feelings that can be felt. Envy turns into pain given by the desire to get what the others have. This pain is perceived as an almost frantic feeling of inner emptiness, as if something had sucked up everything we have inside. Over time it ends up doing a lot of damage, diminishing the person who suffers it. This collection of motivational quotes directed to envious people sums up perfectly this psychological state.

Envy is to suffer psychological blindness

The word envy comes from the Latin word invidere and means “look bad” or “do not see”. In the Divine Comedy, Dante referred to the envious ones as to those who were under a lead coat, with eyelids sewn with lead thread. The etymology of the word itself suggests that envy causes a sort of psychological blindness.

Envious people tend to look at the world through the eyes of others, can be compared to the captain of a ship that sails the seas but instead of being guided by the stars, uses a distorted lens. As a result, the ship will turn in all directions, until it is dragged towards rocks, cliffs or storms. In fact, several motivational quotes on envy refer to the inability to analyze the reality objectively.

1. Our envy always lasts longer than the happiness of those we envy – François de La Rochefoucauld

The envious end up seeing the lives of the others through a distorted prism, then they can’t see that we all have problems. Because these people only see what they want to see, their envy lasts much longer than the happiness of the others.

2. The envious man thinks that if his neighbor breaks a leg, he will be able to walk better himself – Helmut Schoeck

The envious often activate a model of thought that borders the irrational and makes them see happiness where there is misfortune. The problem is that these people end up idealizing the happiness or satisfaction of the others because, in reality, envy is not so much about what the other person has but what is missing the envious person.

3. Envy is a thousand times more terrible than hunger, because it is spiritual hunger – Miguel de Unamuno

Envy is a corrosive feeling that implies the inability to fill one’s life. The envious person does not find anything that makes sense in his life, that makes him vibrate and become excited, so he looks at the others in search of those answers. In fact, anyone who envies what the others have, actually envies the feelings and satisfactions he believes these properties generate.

The essential conditions for envy to grow

For envy to be imposed must be met three conditions. Firstly, it is necessary for the person to compare himself to someone he considers superior, either for his qualities, results or possessions. Secondly, the person has to want those things for himself, or worse, to want the other person to lose them. Third, he must feel bad about the emotions generated by that confrontation. Several thinkers have referred to this toxic triad over the years with motivational quotes about envy that perfectly describe this feeling.

4. Envy is a symptom of lack of appreciation of our own uniqueness and self-worth. Each of us has something to give that no one else has – Elizabeth O’Connor

The envious doesn’t appreciate himself enough, does not feel secure and is not able to recognize what makes him unique. In a certain way, envying is being able to see what is unique in the others but not to see it in oneself. Therefore, in the background, envy is always an expression of low self-esteem and feeling of inferiority.

Envy is a sign of mediocrity, not necessarily for lack of talent but for lack of desire to overcome oneself. The envious usually does not try to reach those who envy, but tries to get that person down to his level, is victim of an unhealthy Procrustes Syndrome.

6. Envy is the art of counting the other fellow’s blessings instead of your own – Harold Coffin

The envious does not recognize his virtues and often belittles them, so he is not able to take advantage of it. Instead, it focuses on the alleged virtues of others and anxiously desires them. But he does not realize that authentic satisfaction does not come by imitating the others, but is achieved only when we find our authentic Ikigai.

The pain that generates envy

The pain of envy is not caused by the qualities or possessions of the others, but by the feeling of inferiority and frustration caused by the lack of self-confidence. In this way, envy sinks the person into a cycle of negativity that prevents him from reaching his maximum potential. With time, that anguish and bitterness can cause physical health problems, so that the person is literally consumed by envy.

In fact, a study conducted at the National Institute of Radiological Sciences of Japan, has found that when people compare themselves to others who are more successful and admit to being envious, are activated the brain regions related to physical pain. And the more intense the envy, the more these neuronal areas are activated.

7. Envy is a declaration of inferiority – Napoleon I.

To envy is to recognize that it is not possible to reach the same point where someone else has arrived and forget our own gifts. It is to condemn ourselves to feeling inferior, less capable and, therefore, less worthy of being happy. That’s why envy is always an insult to ourselves.

8. Envy is like drinking poison and expecting for the other person to die – Carrie Fisher

Envy is a very harmful feeling, especially for those who experience it. Nothing good comes from this feeling because it means having and nurturing resentment, feeling of incapacity and inferiority.

9. People’s envy shows how unhappy they feel; their constant attention to the doings of others how bored they are – Arthur Schopenhauer

Envy is a feeling in which, instead of focusing on progress and growth, the person concentrates all his energy on the others, to confront and criticize. In the end, it is the expression of a profound boredom, of not knowing what to do, so instead of living their lives, the envious ones dedicate themselves to living that of others.

10. As soon as man abandons envy he begins to prepare himself to enter the path of beatitude – Wallace Stevens

The envious find it difficult to appreciate the beautiful things that happen in life because they are too busy to confront with the others and see what they do. In fact, in many cases the envious could lead a better life than those who envy, but they don’t realize it.

This happens because they have their sight placed continuously on the others, they are not able to feel gratitude for the good things they have but compare themselves with the achievements of the others and always consider to be worse. This deep dissatisfaction cannot lead to happiness, because if we do not learn to appreciate what we have, we will not be happy with what we could achieve.