Home » Procrustes Syndrome, why we despise those who succeed 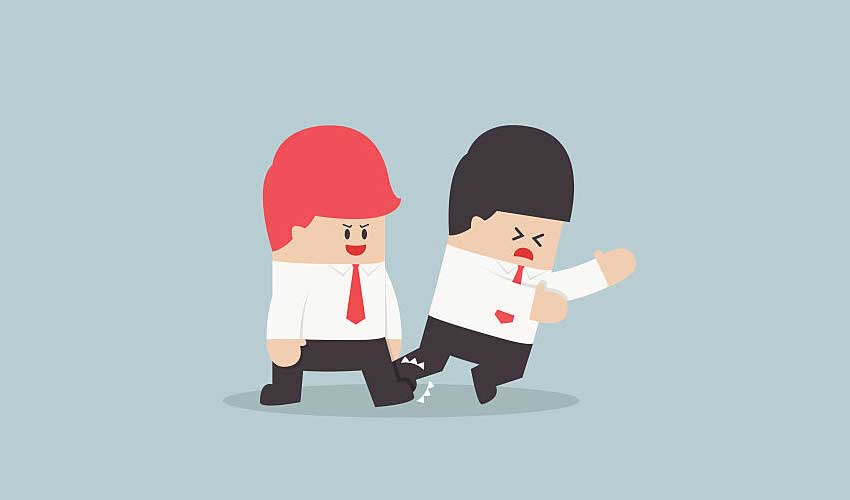 Some people, because of their insecurity or simply because they do not have the necessary skills, try to overshadow those who can overcome them. They do not accept that someone shines more than they do, they think that they make him shadow so they try to turn off their light. These people do not advance, but they do not even let others go on. This phenomenon has been called Procrustes Syndrome and can be seen in all contexts, from the personal to the professional.

The myth of Procrustes

Greek mythology tells that Procrustes was a man of extraordinary stature and strength, living on the hills of Attica, where he offered his inn to solitary travelers. When the traveler slept, Procuste gagged and tied him to the four corners of an iron bed. If the victim’s body was very large, he would amputate the parts protruding from the bed, whether it was the feet or the head.

On the contrary, if the victim was small, he would break the body with a hammer to lengthen it. It is also stated that no one ever fit in the size of the bed because Procrustes had two beds, one exaggeratedly long and the other too short.

That macabre tradition continued until Theseus reversed the game and challenged Procrustes to see if his body fit the size of the bed. When the innkeeper lay down, Theseus gagged him and tied him to the bed. Then he gave him to try his own medicine.

Currently, this myth is used to refer to people trying to get rid or belittle everyone they consider to be better than them. Procrustes cut their heads, but these people resort to boycott, humiliation or deception to make sure that the others do not become a threat. In practice, instead of striving to improve and further develop their skills, they decide to limit the skills of others.

Procrustes Syndrome is a self-condemnation to mediocrity

The person who suffers of Procrustes Syndrome begins to live in the world that builds in his mind, in a parallel universe that leads him to disconnect from reality. In fact, he often makes irrational judgments based solely on his ideas of how reality should be.

On the other hand, his tendency to continually compare himself with others leads him to think that, if the others are brilliant, it means he is not. He cannot conceive that someone shines more than he do, so instead of trying to grow as a person and broaden his horizons, he tries to limit those of the others. He thinks that everyone will end up being equal.

Without a doubt, living this way is exhausting. In fact, it is not strange that these people end up developing mental disorders because, finally, they show a profoundly disadaptive behavior.

But the most curious thing is that turning into the mythological character simply means condemning yourself to what you want to avoid: mediocrity. The person who devotes his resources to stumbling others to lower their level does not really grow but resigns to his own mediocrity.

How do you recognize a person who suffers from the Procrustes Syndrome?

– It assumes a domineering attitude to hide its insecurity and the feeling of inferiority. Although they do not recognize it, these people feel a huge feeling of inferiority, which is why they feel threatened by someone who can overcome them. The fear of losing one’s position is what drives them to stumble the others. But fear and insecurity usually manifest themselves as arrogance because these people wish to mask their shortcomings.

– Reacts by becoming defensive. For those who suffer from the Procrustes Syndrome, anyone can become the enemy. For this reason they usually react to any comment by putting themselves on the defensive and attacking trying to overcome their rival and contain the perceived threat.

– Deforms reality to its advantage. The term “Procrustean Bed” is also used to refer to an error in which these people tend to fall: they distort the reality in such a way that it adapts to their ideas. In practice, instead of accepting objective data, they manipulate them at will to match them with their image of reality.

– Is intolerant. At the base of the Procrustes Syndrome there is a lack of tolerance for differences. These people do not assume that we are all unique and have different skills in different areas.

– Accumulates responsibility. Some of these people want to excel so much that they end up taking all the responsibilities for themselves, with the goal that the others notice their “incredible” work capacity. They are also annoyed when tasks are given to others because they interpret it as a personal attack.

– Develops a strong resistance to change. We all have some resistance to change, but people with the Procrustes Syndrome are even more resistant because they fear they will not be able to adapt and succeed in transformations. Anything that causes them to come out of their comfort zone generates rejection and fear.

– Expresses judgments in the form of absolute truths. For these people, the only valid ideas are theirs, all the others do not find a place, so it is usually very difficult to relate to them. The problem is that normally their ideas respond to arbitrary standards and they try to force the others to follow them to the letter. In this way they get the uniformity they desire.

How to deal with these situations?

It is not easy to live with someone who behaves like Procrustes. This person will be forced to live permanently on guard, awaiting for the next attack, the new humiliation or an exemplary punishment. Being continuously trampled can cause the person to react in two ways: either he resigns himself to humiliation and little by little becomes smaller, obscuring all the light in him; or accumulates resentment and hatred. No one of the two situations is positive.

If we see that someone close to us behaves like the mythological character, the most convenient thing to do is boycott his strategy of action without losing the calm. We must be aware that in some cases we cannot change his way of being and thinking, but we can prevent his attacks from affecting us.

The best way to do this is to resort to indisputable facts of reality, but without falling into pointless comparisons. The idea to convey is that we are all different and have different levels of capacity, which does not mean we are better or worse. It is important to understand the mental dynamics of this person and make sure that he does not perceive us as an opponent to beat.

Of course, it is also important to be careful not to transform ourselves in Procrustes. That evil giant can be born from a spark of envy, a feeling of inferiority or a missed goal.