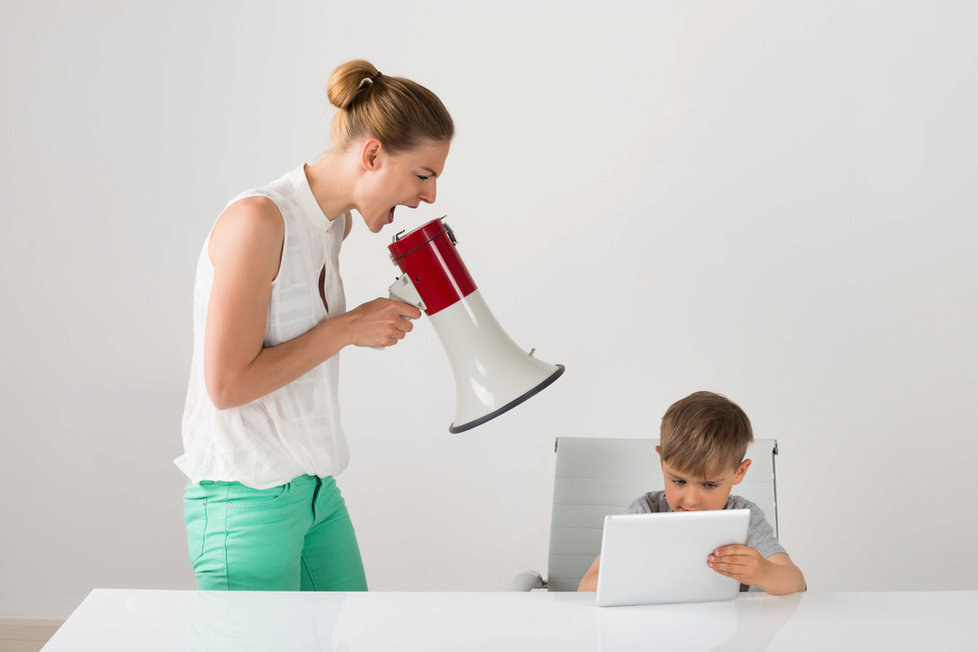 Raising your voice will not give you the reason. Also, using this as an educational resource can be completely counterproductive. In fact, when we cry out to children we’re just recognizing that both we have lost the control. Yelling is a sign that the situation got out of hand and we do not know how to approach it.

In the US they say that screaming to children is like using the horn while driving the car, and usually generates the same results. Also, we do not normally shout after a careful and deep reflection, because we believe it is the most effective tactic, we scream because we do not know what else to do.

The situations that lead us to speak out are varied, but it is seen that the maternal isolation and the nervous exhaustion are the main causes. In fact, many parents recognize that behind their screams hide stress and fatigue. In practice, what leads us to yell is not so much the child’s behavior, but rather our inability to deal with the situation, probably because our cognitive and emotional resources are depleted.

Shouting affects the psychological and cerebral development of children

A study at the University of Pittsburgh found that yelling regularly to children as a form of discipline, holds many risks for their psychological development, including the possibility of developing an aggressive behavior or, conversely, over-shies.

These psychologists have analyzed 976 families and their children for two years, and found that crying out daily as part of the educational style, could predict the onset of behavioral problems in adolescents aged 13 or depressive symptoms at the age of 14.

Furthermore, they discovered that instead of minimizing the problems, the cries tended to aggravate the disobedience. They also saw that the “warmth” of parents; that is, their love and degree of emotional support, did not reduce the psychological impact of screams. This means that the mark left by the screams can’t be cleared with a hug or a loving gesture.

Another research conducted by a group of psychiatrists at Harvard Medical School has made a step further: its results warn that verbal abuse, such as yelling and humiliation, can alter significantly and permanently the brain structure of children.

These researchers analyzed the brains of 51 children who received psychiatric treatment and compared them to those of 97 healthy children. So they discovered that abandonment, corporal punishment and verbal discipline caused a significant reduction of the corpus callosum, a sort of “cable” consisting of nerve cells that connects the two hemispheres of the brain.

A smaller corpus callosum causes a lower integration of the two halves of the brain, which can cause dramatic changes in mood and personality. The study also found a decrease in activity in parts of the brain associated with emotions and attention. These children had a lower blood flow to a part of the brain known as the cerebellar vermis, which is essential to maintain a good emotional balance.

Why yelling causes so much suffering to children?

When children are very young they are not able to distinguish the difference between shouts and affection. In practice, they do not understand that if parents raise their voices with them does not mean they do not love them, but that can be stressed or are blaming them for a bad behavior. Not knowing the difference could create a strong feeling of anxiety and stress. In fact, the researchers believe that changes in brain structure are due to the excessive release of cortisol, the stress hormone, during the first years of life.

It is curious, but children and adolescents who have grown up in an environment where screams are daily bread, are also twice as likely to have an abnormal brain electrical activity. In some cases, this activity has even been likened to that of people who suffer from epilepsy.

How to stop screaming to your children?

– Assume that yelling is synonymous of losing the control. Screams are not an educational strategy or a discipline, but a sign that the situation is out of control. If you are aware of this difference you’ll be able to cope better with the situation.

– Find out what are the situations and times when you screams more. The researchers found that parents often shout at some time throughout the day, such as at breakfast, before going to school or in the evening. Locating this scheme will allow you to discover the root cause of your behavior, which generally tends to be hurry, stress or fatigue.

– Take your time to calm down. It is important that parents are alert to signs that indicate that are losing the control. Before you let the emotional brain take control, take a minute to calm down. Breathe deeply and, if necessary, leave the room.

– Do not feed high expectations. Sometimes frustration stems from the difference between expectations and reality. It’s possible that you’re frustrated because you expect that your son did the tasks alone, for example, and this didn’t happen. Therefore, it is sometimes convenient to remember that he’s only a child and does not do things out of spite against you, but still needs to get mature.

– Do not feel guilty. In any case, you don’t have to feel guilty because feeling bad can only increase the tension. Anyone can shout out from time to time, you just have to make sure it does not become the norm. Parenting is not easy, and you do not have to claim to be perfect, just make sure to always show the best part of yourself.