Home » The symptoms of stress in women 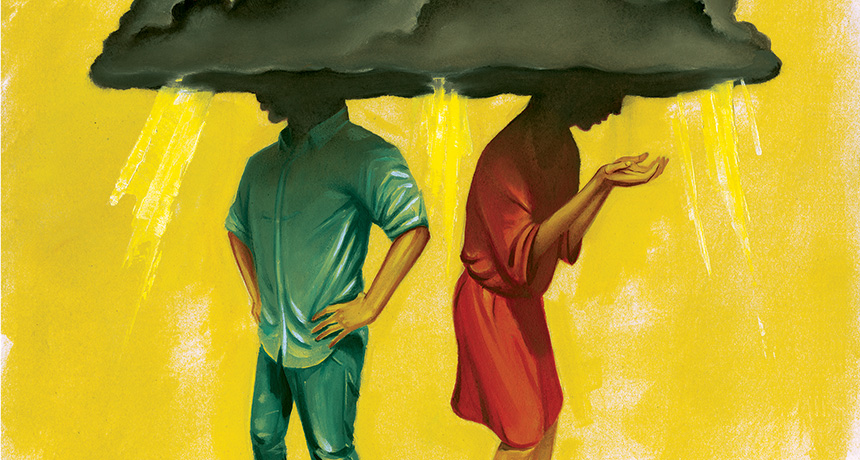 The stress is the modern evil. We live, or believe that we live, in a world besieged by dangers, potential dangers that lie waiting for us and expecting us to lower our guard to attack. That generates a state of constant alert that makes us tense and irritable. However, not all of us react in the same way. The stress in women manifests differently and is often more intense than stress symptoms in men. There are gender differences in the way of experiencing and facing this state of anxiety.

The level of stress in women doubles the stress in men

Psychologists at the University of Cambridge conducted a study in which they discovered that Western women are almost twice as stressed as men. These researchers analyzed 48 previous studies on anxiety disorders to identify which groups experience more stress, taking into account factors such as gender, age, medical conditions and mental disorders.

It was seen that 4 out of 100 people suffer some degree of anxiety, from stress to generalized anxiety. However, for every stressed man, there are 1.9 women who suffer from an anxiety disorder, and women under 35 are the most affected.

Interestingly, married women also report higher stress levels than single women: 33% vs. 22% respectively. In addition, single women have a greater perception of control over their lives and feel that they are doing what is necessary to manage the stress. On the contrary, married women report greater affectation due to stress, suffering more episodes of crying, irritation, anger, fatigue and headaches.

The symptoms of stress in women

Men and women react differently to stress, both physically and mentally. They try to manage stress by following very different strategies and also perceive their ability to deal with problems, as well as the things that stand in their way, in very different ways. These different ways of perceiving and dealing with setbacks determine the symptoms of stress in women.

Why do women get more stressed?

The hormonal differences are just one variable in the equation that exacerbates the symptoms of stress in women. The differences in the way of living stress and dealing with it play a more important role in its impact on female well-being.

Women are more sensitive to conflicts and problems in interpersonal relationships because they tend to confer greater importance to it. 84% of women say that maintaining a good family relationship is very important, compared to 74% of men. Interestingly, they also report more stress when they must connect with other people and spend time with family and friends.

Therefore, it is not surprising that a research conducted at the University of California suggests that most of the stressful events that trigger stress in women are related to their social network, such as problems in the relationship, the raising of children or the loss of a close person.

In many cases, the symptoms of stress in women are intensified due to the importance they give it. In practice, by focusing more on them and giving them a more protagonist role, the perception of discomfort and dissatisfaction increases, thus closing a vicious circle.

For example, although insomnia attacks both men and women, 75% of women report that sleep is very important, an opinion that only 58% of men share. This means that the psychological and physical impact of insomnia will end up being more pronounced in women. We can not forget that everything in which we focus our attention is amplified.

There are many reasons to be stressed, so it is important to have good coping strategies. If we do not have good psychological tools to deal with setbacks and adversity, stress will increase. Once again, men and women often behave differently when the time comes to deal with stress.

Women tend to use more emotional and avoidant coping strategies. They are also less rational when assessing the situation and have more difficulty practicing detachment. It’s not strange since a study conducted at the University of Pennsylvania in which more than 1,000 brain scans were analyzed, revealed that the female brain is better “wired” to retain emotional details, which allows them to connect better with the others but also becomes a barrier when establishing a psychological distance. Men, on the other hand, tend to prefer to inhibit emotions and implement direct coping strategies.

– Feeling of lack of control

Perhaps one of the variables that most influences the perception of stress in women and men is self-control. Although both, men and women stressed, indicate that the main barrier to making positive changes in their lifestyle to get rid of stress is willpower, many women recognize that lack of self-control is their main obstacle to dealing with stress.

The problem is that when we perceive that we have no control over our life, will soon appear the learned helplessness, which makes us lose confidence in our abilities to overcome adversity. Feeling that we are a leaf moved by the wind generates even more stress.

The best strategy to cope with stress: Contextualizing

What is the best way to cope with stress? It depends on the situation. For example, a direct coping style may be useful in some circumstances while in others it may be more adaptive to assume an avoidant style of coping. Sometimes it is necessary to get carried away by emotions, other times it is better to be more rational.

Beyond the differences in coping strategies and stress symptoms in women and men, the most important thing is to know our weak points, work to reinforce them and analyze each situation to respond in the most assertive way possible.