Home » Anxiety Dizziness: How to recognize and treat it 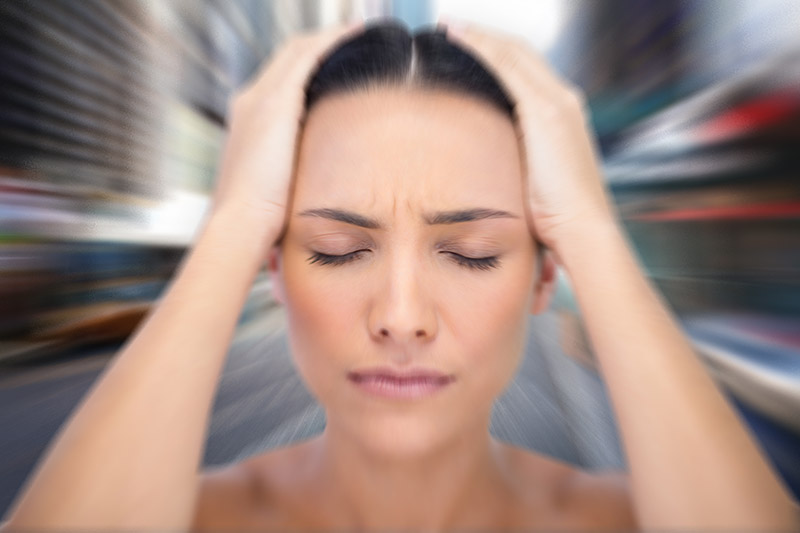 There are people who can suffer from anxiety dizziness, a physiological reaction to a psychological state that can be classified as a psychosomatic symptom. However, the fact that dizziness is caused by anxiety does not mean that it is less intense or disabling for the person.

Often these people feel very bad, they experience a general feeling of weakness and loss of balance. In the most extreme cases they may also faint.

Usually these people come to the psychologist after meeting several specialists who have excluded that dizziness is a problem of the internal ear, cervical, caused by a vestibular headache or other central nervous system injuries. This walk from one physician to another becomes exhausting, but when there is no organic cause to explain dizziness, it is logical to suspect that it has a psychological origin, generally produced by anxiety.

How to know if dizziness is caused by anxiety?

It is important to understand that when dizziness is caused by anxiety, there is no a classic dizziness sensation and there must be no biological explanation. This dizziness is a sensation that the person experiences when exposed, or imagine, that he or she will have to be exposed to certain situations that create fear, tension or anxiety.

In practice, what happens is that these feelings and emotions are experienced with great intensity, so that they produce neurovegetative reactions such as dizziness. In fact, fear is a very powerful emotion that triggers intense and quick physiological responses to prepare us to escape the danger. Fear causes strong muscular tension, profuse sweating, agitated breathing and increases blood circulation, so we can escape the danger or face it more likely to succeed.

Another consequence of fear is that it refines our senses so that we can capture the small signs of danger in the environment. However, on some occasions this concentration ability can make us perceive reality in a slightly distorted way. For example, colors and lights can be perceived much more clearly, while we do not feel good about what’s happening around us. This condition can further aggravate the feeling of dizziness.

There are some indications that dizziness can be caused by anxiety:

– There is no physiological cause that justifies dizziness after having performed several medical examinations.

– Dizziness is persistent, but usually tend to occur in specific situations or have some common point. However, in some cases vertigo may occur for several days or even weeks. In these cases, the person usually reports a feeling of instability, rather than dizziness.

– Vertigo aggravates by exposing to excessive stimuli, such as crowded supermarkets, or when performing activities that require intensive viewing, such as reading or working at the computer.

– You suffer from internal dizziness. In anxiety dizziness, the feeling of movement tends to be internal, the person feels that his head is turning, not the environment.

People who suffer an intense anxiety often feel the sensation of losing the balance and it is common for them to feel stunned for no apparent reason. The neuroscientists at Pittsburgh University explain that the problem is that anxiety and balance share some neural circuits.

In fact, there are neural pathways that connect vestibular nuclei with the limbic system, including areas of the hypothalamus, which usually have a reduction in their volume in cases of chronic bilateral vestibular loss.

The convergence point of this circuit is the parabrachial nucleus, where both vestibular and anxiety related information arrive. That is why, when we are anxious, we can experience dizziness and loss of balance.

It is also known that stress and anxiety can affect the central vestibular function, either directly through the action of glucocorticoids (cortisol and corticosterone) in ion channels and neurotransmission that occurs in the brain, or indirectly through the effects of neuroactive substances stress-related, such as histamine.

What factors can influence its appearance and maintenance?

Our body is a mechanism perfectly associated with our minds, though sometimes we do not realize it. However, we can hear the famous butterflies in the stomach when we are in front of someone we like or feels a knot in the throat when we receive bad news. These ways of expressing ourselves indicate that there is a strong connection between emotions and physical states. Therefore, there are some factors that affect the onset of dizziness or that can nourish them.

– Lack of breath. Since we breathe automatically, we are not always aware of how bad we can do it. In fact, if you breathe in a superficial and fast way, dizziness could be caused by the fact that you inhale more air than you release. In this way end up hyperventilating which means that it enters more oxygen than you need and the level of carbon dioxide decreases. By breaking the balance between the two gases, the body tries to balance the pH of the blood that becomes alkaline, which can cause a feeling of dizziness, leg weakness, difficulty of vision and tingling at the extremities.

– Panic and anguish. If we do not control these sensations, the heart beats faster and increases blood pressure. In those moments you begin to notice headaches and weaknesses. But when blood pressure drops, dizziness usually appears with a feeling of confusion or mental fog.

– Muscle tension. When we are afraid we usually tend our muscles, preparing them for figt or fly. When this muscle tension is maintained day by day, it can generate a generalized feeling of diffuse discomfort that increases even more the tension you’re already suffering.

– Stress. Being in a constant state of mental overloading, which brings you to the limit, is one of the causes of anxiety. The problem is that stress generates a constant state of alert, as if you are facing an imminent danger, and this overloads of work the central nervous system. As a result, you may begin to feel weak, your head turns, you are confused or even feel a sense of despair, a strange feeling of disconnection from the world.

Are these symptoms dangerous?

As a general rule, the symptoms associated with anxiety are not dangerous, though they can become very unpleasant. Dizziness itself is not a problem, unless it appears in situations that represent a certain risk. In fact, in some cases, the person may experience an unpleasant feeling that makes him lose the balance.

However, the person may be very frightened by the symptoms, so that usually takes a hyper-vigilant attitude that leads him to pay more attention to physiological responses. This state of tension complicates even more the things, especially when the person perceives the slightest signal of dizziness.

In fact, one of the major problems caused by anxiety dizziness is the fear of fear. When the person begins to fear that dizziness comes to him in public places and is ashamed for it, that tension can actually cause dizziness, becoming a self-fulfilling prophecy. As a result, the person can heavily restrict his lives, avoiding all those places where feels uncomfortable. The feeling of anxiety that dizziness may appear can arise at any time by ending to affect the quality of life.

Knowing that dizziness is not dangerous will help the person relax and not worsen the symptoms. On the other hand, knowing that the cause is anxiety, indicates that this is not a serious problem, but it is a disorder that has a solution in applying the appropriate therapy.

How to Treat Axiety Dizziness?

There are several therapeutic approaches to teach the person how to fight anxiety and thus eliminate dizziness. However, the tecnique that permits to detect and manage the feared consecuence is very effective in these cases. Basically, it aims to identify the sources of discomfort and anxiety that cause dizziness and find solutions that reduce the symptoms, both physically and emotionally.

Before putting it into practice, it is important to understand that discomfort is maintained when we try to make the dreadful consequence turn into an impossible fact, obsessively seeking solutions. Therefore, this technique tells us first of all that we must not avoid the annoying sensations.

Basically, the person must understand that anxiety generates a series of unpleasant feelings, but that are not dangerous in themselves. This eliminates the uncertainty of the equation and when the person is no longer afflicted or worried about dizziness, the level of anxiety and the symptoms it generates usually diminishes.

The person must understand that uncertainty and anxiety are the causes of that discomfort and that he needs to seek alternative thoughts or behaviors that allow him to avoid these anxious thoughts. In this case, you can apply other techniques, such as:

– Breathing exercises. By breathing deeply, hyperventilation decreases as more oxygenation is obtained. On the other hand, deep breathing accompanies the heartbeat, generating a sense of tranquility and well-being. Therefore, it is advisable to learn about breathing exercises that can be applied in any situation.

– Relaxation techniques. Jacobson Relaxation is one of the most useful exercises because the person not only relaxes but also learns to relax the different muscle groups. With this technique you will also learn to notice bodily tension, so you can relieve it quickly before it gets worse.

However, it should be clarified that in many cases it is necessary to resort to psychological therapy or drugs, especially when the link between anxiety and vertigo is very strong and long-lasting.