Home » 3 differences between sadness and depression that everyone should know 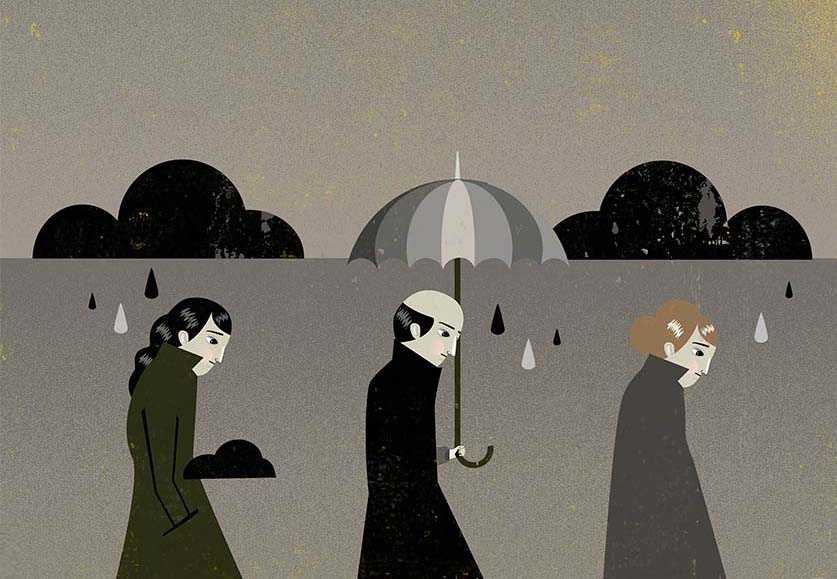 Sadness is a feeling to which we tend to escape, even if we can’t, because throughout life we ​​have to deal with many situations that create a deep sadness like the loss of beloved ones.

In fact, sadness is an emotion, a normal reaction to events that affect us. Being sad does not mean being depressed, but often people use the two terms as synonyms. Anyway, a deep sadness that lasts for a long time can give way to depression.

Although depression usually has a genetic influence, situations such as the loss of a beloved person or a heavy failure can generate a huge sadness that could lead to depression. This means that, to a greater or lesser degree, we all have the chance of falling into the soreness of depression, so it is important to know how it differs from sadness.

What differentiates sadness from depression?

1. Sadness is an emotion, depression is a disorder

Sadness is an emotion and as such, it has an adaptive value. Psychologists at the University of Indiana have found that sadness causes a greater degree of physiological activation to help us cope with the loss. In fact, if we think about it, we feel more motivated to act when we are sad than when we feel happy and satisfied.

In addition, depression is a psychological disorder and sadness is just one of its symptoms. Depressive symptoms are accompanied by feelings of anxiety, helplessness, despair, and profound apathy. The person often tends to feel guilty, making it difficult to make decisions and concentrate. In many cases appear also suicidal thoughts.

2. Sadness is fleeting, depression is lasting

A research carried out by psychologists at the University of Leuven, Belgium, has shown that sadness is the most enduring emotion, lagging behind 240 times more than others to disappear. Nevertheless, sadness continues to be a “temporary” emotion, as it usually lasts a couple of days or at most a couple of weeks.

Instead, depression is a chronic condition that is diagnosed after a person has shown the same symptoms for at least six months. In some cases there have been periods of improvement, but they have not been very long.

3. Depression never comes alone, it is accompanied by apathy and anedonia

When we feel sad it is normal that we have no desire to celebrate and we can also experience tiredness and lack of energy. Yet, we are able to continue our routine and we can also enjoy the little daily pleasures that help us improve the mood.

While depressed we are suffering from apathy and anedonia, indifference and pessimism can last for weeks or even months. The person feels that the most trivial of everyday activities, such as shopping, brushing the teeth or eating, are terribly tiring and have no sense. The depressed person loses the initiative and finds nothing to motivate and makes him/her happy.

What happens when sadness doesn’t go away?

Throughout our lives we experience several situations that create sadness and we are able to get out of them. In fact, many of these situations serve to strengthen us and allow us enrich our arsenal of psychological tools that we need to deal with life.

However, when sadness lasts for long and you believe that you have not made any improvement, but you feel worse every day, it is advisable to seek psychological help. Prolonged sadness can lead to depression. If you can’t rediscover the joy of living, isolate yourself from the others and close yourself in your negative thoughts, you have the risk of developing depression.

There is no need to wait for depression to set its roots, a psychologist can help you overcome sadness and recover your daily life. In fact, you have to consider that the more you wait before asking for help, the more likely will appear other associated disorders that worsen the situation.

A study of the University of San Diego has revealed some signs that may indicate that depression is ongoing. According to these researchers, 74% of people with a diagnosis of depression started having trouble falling asleep from the earliest stages of the disease, 38% also had memory problems and concentration problems, and 50% said they felt fatigued since a long time.

There are several psychotherapeutic approaches to depression, one of the most solid and well-known are Third Wave of Cognitive Behavioral Therapies. Those who use these therapies explain that unlike previous ones, this set of methods and techniques focuses on thoughts, feelings and emotions so that instead of changing the content of the thoughts, a rather difficult process and not without frustration for the person, it focuses on changing the perception and relationship with thoughts, so they stop from being a problem.

Unlike other psychotherapeutic approaches, these therapies focus on enhancing a range of skills that the person can apply in different situations, since it is not just about eliminating the symptoms but improving personal well-being and growth.

Within these therapies there are techniques such as Mindfulness Meditation and Eye Movement Desensitization and Reprocessing (EMDR), which have proven to be effective in relieving the symptoms of depression and reducing the emotional burden of traumatic events. In fact, a study at Oxford University has shown that mindfulness meditation is effective in treating depression and preventing relapses as well as antidepressants.